When I asked my Instagram followers for their questions on the topic of friendship last week, I expected a lot of them to be about making friends as an adult—a topic I’ve been asked about many times since I wrote about my friendship complex in February 2018. But to my surprise, the majority of them revolved around the opposite: how to end friendships as an adult. Here are three:

“How do I let old friendships go?”

“My friendship with a best friend of 14 years just ended. We didn’t have the healthiest friendship in several ways—so it’s definitely for the best. But it’s been messy because our lives were so intertwined and we have so many mutual friends. Would love to hear your thoughts on a close friendship ending. It feels so much like a breakup.”

“When a friendship ends, does it alter the value it had?”

The timing felt eerie, as I’ve been grappling with the end of a friendship myself. But that also meant I wasn’t sure I was equipped to speak on any of it yet. Did it matter that I hadn’t fully metabolized the experience? Or intellectualized the shit out of it until I could explain it away with the right words? The longer I considered these points, the more obvious it became that I had to try. Because in its ideal form, Ask MR isn’t about answering questions, but exploring the hard ones together.

Let’s start where these things often do: I’d been meaning to bring this friendship issue up in therapy for months, but it always took a backseat to something “more urgent.” Like my existential angst. My love life. That thing my dad said when I was 15. (I love when therapy is as cliché as it sounds.) It wasn’t until we had an unusually slow session that I finally raised it. “Every time I think of her I get a pit in my stomach,” I said.

As I relayed the situation to my therapist, I realized how much more complicated it was than I’d been giving it credit for. And especially how much it overlapped with other important fixtures in my life—my decision to move to New York, my oldest friends, my sense of self. Still, I resisted giving it gravity: “I don’t know why it bothers me so much,” I said, my chest tightening. “We had fundamental differences even when we were close. I have so many more enriching relationships. This isn’t a big deal.” The contradiction between my words and my body language was laughable, and we both knew it.

Friendships exist at an unusual emotional intersection in that they feel both deeply important and easy to push aside, mentally, in favor of things like love, family, and work. This incongruence can be startling when a friendship is a source of pain. Whereas we anticipate work to be stressful, and even love to be difficult, I think many of us expect friendships to be bolstering and additive, and nothing else. And only when things go wrong do we have to confront how misguided that is.

Real-time realization #1: Maybe half the work of grappling with a friendship ending is accepting that such a shift qualifies as a Big Life Event, along with the more obvious milestones, like romantic breakups, job loss, or cross-country moves. Friendship breakups may not happen all at once, or even require us to change our lives to weather them, but that doesn’t mean they can’t be just as consciousness-altering. In fact, the subtlety of them might make them even more so.

As contact with this friend of mine started to wane, the health of our friendship wasn’t always clear to me. Was our drifting organic—a natural response to changing circumstances—or evidence of a more serious problem? In hindsight it seems obvious that I should have asked, but at the time that felt alarmist, or even self-centered. So I just kept trying to be normal with her until it was clear my efforts weren’t being reciprocated. Quietly filling in the blanks through all this probably made things worse. And more pressingly, it gave my fears a lot of mental real estate, especially as they pertained to the new friendships I was trying to build in New York.

The impetus of the drift aside, this friendship had come into my life during an intense period of change in my twenties, and losing it felt like mourning a part of myself. From an outsider’s perspective, maybe it was obvious we were going in different directions, but from the inside, it felt like a kind of betrayal, the way even necessary change sometimes can.

Real-time realization #2: Since friendships are primarily driven by a mutual understanding or compatibility—unlike family, who aren’t chosen, and unlike romantic relationships, which are charged with something more primal—moving on from them often means acknowledging a deeper change within yourself, or within your friend. In essence, it’s a personality problem. You can’t move on from a friendship without moving on from a part of who you once were.

When my therapist asked me why my lost friend gave me a pit, I had to admit there was also some ego involved. I’ve always suspected this friend distanced herself from me because she felt I’d wronged her somehow. And even though I’ve considered this perspective and don’t agree with it, the misunderstanding has left me with two fears: the first being that I did in fact wrong her and am too blind to see it (or proud to admit it), and the second being, frankly, that she thinks ill of me. Both of these concern my self-conception and reputation, rather than my actual friend, and this makes me feel guilty, too. When my therapist replied with the cliché “it’s not your fault,” I was almost embarrassed at how much relief the words brought me.

Real-time realization #3: It helps to recognize the role your ego is playing in your feelings about the dissolution of a friendship. Parsing the difference between wanting to save a friendship, a resistance to change in general, and a sense of preserving an idea about who we are—emotions that can often resemble each other in this context—is important. For me, it’s helped to acknowledge that moving on from this friendship means accepting that I can’t control how she (or anyone) feels about me.

When I first met this friend, we were going through different but compatible transitions, and this lent our connection a kind of alchemy. So when our situations changed and our connection fizzled, I was left to question if we ever had anything in common at all. A loss of friendship can feel disarming like that; it can signal a recalibration of your past. But this brings me to the third question above: “When a friendship ends, does it alter the value it had?” Although my insecurity wants me to interpret this breakup as proof the past was somehow false—or my reading of it delusional—it’s probably more true that our connection was strong for a reason, even if that reason was ephemeral. This reminds me of the trope that friends come into your life for a reason, a season, or a lifetime. It’s the kind of cliché you forget until you stumble upon it yourself.

Real-time realization #4: Some friendships aren’t forever, and that doesn’t make them any less important.

The notion of friendship transience can complicate things. Since friendship implies a kind of plurality, and that people come in and out of our lives at different times, I think it’s easy to forget that platonic connections involve a complex coming together of emotions, world views, and motives. We aren’t taught to manage friendships to the extent we’re taught to manage romantic or familial relationships. The implication is they’ll simply continue or be replaced. Of course, when this comes into conflict with our emotional experience, as it’s clearly wont to do, it can feel confusing. (See: My insistence that “this isn’t a big deal” with my hand pressed to my forehead.)

Real-time realization #5 isn’t so different from #1: Friendships can be just as complex and formative as romantic relationships, which is why more of us need tools for navigating complicated but important ones, and language for the occasional (but inevitable) heartbreak. (There will be a story on MR soon in which a couples therapist gets into the tactics of this!)

When another long-distance friend and I were feeling our geographical divide last year, she confronted me about it. I was caught off-guard, and it led to some really difficult conversations, but it ultimately saved our friendship. I’m grateful she decided to say something, and it’s inspired me to approach some of my other relationships with a similar kind of care. It’s hard to talk about these things without feeling like kind of a sap, or maybe like I’m making something small feel too big, but if I’ve learned anything through unpacking all this, it’s that minimizing it only makes it harder.

Real-time realization #6: Friendships represent parts of ourselves, and navigating them isn’t so different from figuring out who we are. When we downplay how they make us feel, I think we miss an opportunity for a unique form of introspection. Social connections, with all the comfort, rapture, and heartache they inspire, can be external reflections of our internal worlds. In the end, who we choose to connect with and disconnect with stands to tell us a lot about what we want, how we’ve changed, and why in the world that matters. 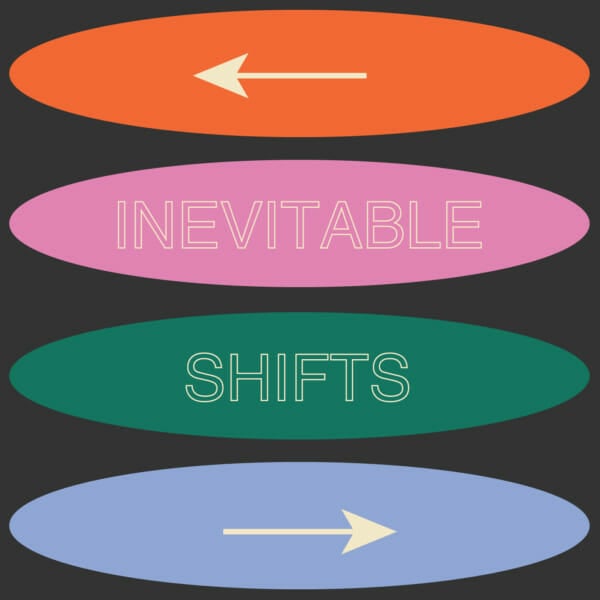