Here are two facts you might not know about me:

As a result of these two facts, my deodorants of choice have typically been of the aluminum-based, sweat-stopping, smell-busting variety. The last time I used a “natural” deodorant was when my mom purchased a pure mineral salt deodorant stick for me at the onset of puberty and we mutually decided it was not sufficient. I’ve stuck to the hard stuff ever since. And then a sample of Megababe’s Rosy Pits Daily Deodorant landed on my desk. Formulated without aluminum, parabens, alcohol or baking soda (which is commonly found in natural deodorants and can cause irritation), Rosy Pits is billed as a natural blend of antibacterial actives, including sage and sandalwood, formulated to prevent odor-causing bacteria from cropping up on the skin. 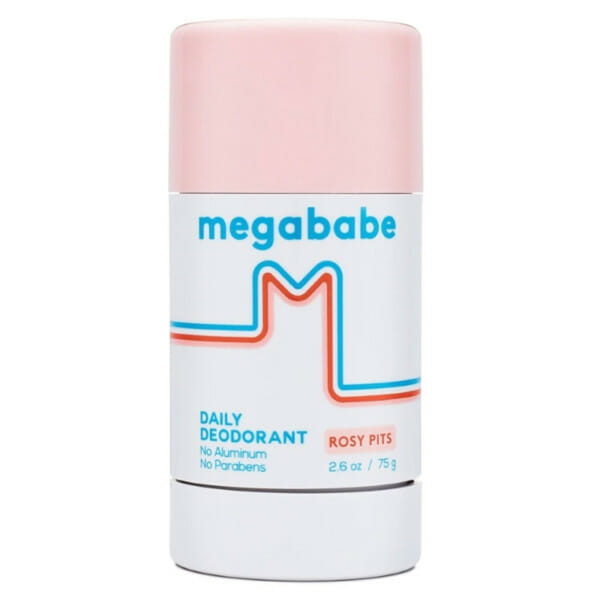 I was skeptical about its ability to squash my particularly robust crop of bacteria, but frankly, when I unscrewed the top and held the pale pink stick up to my nose for a sniff, I didn’t care. It smelled AMAZING. Like, dancing-naked-in-a-sun-drenched-rose-garden-somewhere-near-the-ocean amazing. I wanted to rub it over my whole body, but instead I rubbed it under my armpits per the instructions. I figured that even if it didn’t work and I had to return to my aluminum-based deodorant ways, I would at least have the pleasure of smelling like a sun-drenched rose garden for the 24 hours I was testing it out.

I won’t lie: It was a bit of an adjustment. Even though I smelled like the aforementioned rose garden when I first applied Rosy Pits in the morning (seriously the stuff smelled so good I kept lifting up my arms and taking deep whiffs), by midday, I started to detect the scent of my sour vinegar B.O. creeping through. I would have given up if not for the reality that after a day of wearing it I was so devoted to the smell of Rosy Pitts I was committed to making it work, not to mention the following words of caution on the Megababe website: “Allow 2 weeks for body to adjust from a traditional antiperspirant.”

Okay, I thought to myself. Two weeks it is!

During the past two weeks, I’ve worn Rosy Pits every day. I wore it in the trenches of a New York City subway. I wore it to barre class. I wore it when I was traveling in Italy and went on a five-mile hike. I wore it with a silk dress. In the beginning of my experiment, I had to apply it a few times a day to maximize its odor-quelling powers (and I do want to emphasize that even if I was already starting to smell bad before reapplying, the moment I swiped on another coat I would immediately go back to smelling like roses — it was very effective). By the end of the two weeks, though, I noticed I wasn’t having to reapply as much. I could get away with one application, maybe two if it was particularly hot out or if I was doing something active.

Apparently this adjustment period is typical when switching over to natural deodorants. Studies have shown that conventional deodorants can actually make you smell worse by wiping out all the good bacteria in your armpits and allowing the bad bacteria to proliferate, so when you switch, it can take your ‘lil microbiome some time to acclimate. Patience is key. I don’t think I’m 100% adjusted yet, but given the improvements I’ve seen over the course of my experiment, I’m prepared to stick with it until the finish line.

I’m not exaggerating when I say I’ve never smelled a deodorant that smells as good as Rosy Pits. My nose was convinced at first whiff. At a certain point, it began to feel like a crime to not go one step further and shout my enamor from the rooftops of the internet. I hope these 751 words will at least temporarily quell my desire to approach random strangers on the street, grab them by their collars and inquire if they want their pits to smell like a sun-drenched rose garden, too.

Do you use a natural deodorant? If so, which one? Any general natural deo tips? I’m new to this club and eager for any and all pit-related info.

P.S. The creator of Rosy Pits is none other than  MR contributor/model/pal Katie Sturino, but I’m writing about the product because I genuinely love it, not because Katie’s brain happened to come up with it (although, to be clear, her brain is a delight).