It was a typical day when I found out Joe Biden announced Kamala Harris as his vice presidential pic. I had just finished watering my vegetable garden and came inside to sit on the couch while checking my social media on my phone. I felt pangs of excitement and joy. I celebrated and silently prayed. I eagerly scrolled through my newsfeed and saw posts from friends and family members who shared in that excitement. I was also cautiously optimistic.

My mixed feelings stemmed from a history of both lived and observed experiences. I have witnessed Black women being placed under glass ceilings and trying to live up to unattainable standards that are set up to make them fail. For instance, a close friend of mine was hired for her first management job, and she was the only Black manager at the retail store. No one told her that she would be expected to fix managerial problems that she wasn’t even trained to correct. She was blamed for things that weren’t her responsibilities, she has been set up. In my own life, there have been similar struggles. I have felt the frustration of being treated like a diversity hire, instead of a valuable employee. While working in education, there was a specific job that used me as a Black face to illustrate diversity, but when it came to receiving help, no one seemed to care about me. I would have people steal my teaching supplies and gossip about my natural hair texture. When I was an undergraduate, I had a white professor tell me that I should be content with a lower grade than I earned. They believed I would fine because our school had a repeat and replace system, and that I should strive for less when it came to academic achievement that semester. With each of these experiences, there was so much ambition and tenacity that was met with contestation and erasure. It’s been frustrating and exhausting at the same time. Like many other Black women, it feels like I have been expected to sink, instead of being encouraged to swim.

I also know that Black leaders, sometimes even those with good intentions, are not immune to oversights that contribute to anti-blackness. I’ve witnessed Black leaders overlook intersectionality and Black womanhood as well as Black leaders in police departments that make excuses for white officers that brutalize unarmed Black people that are disproportionately targeted by law enforcement. This includes Harris, as her approaches to leadership have not always been successful in advocating for the Black community.

Clinical social worker Ayana A. Ali works with patients who are struggling with race-related trauma and believes that one of the reasons Black women are loyal to Harris is because they identify with the way she has been vilified by the media, in much the same way I have. Ali explained, “Because Black women are often stereotyped and maligned, especially in the media, many may feel that speaking publicly about criticism of Harris is a betrayal, only serving to further perpetuate those societal tendencies, even if they support her. However, if we truly want to have opportunities like everyone else, we have to be willing to allow our candidates’ records and platforms to be analyzed and critiqued like everyone else’s. We don’t need Black women to be treated with kid gloves, we need them to be treated fairly.”

Misogynoir is sexism that is directed specifically against Black women through racist, gendered aggression and rhetoric. In this campaign, it manifested in the way complaints about Harris have gone beyond political issues, and critiques that intersect with race. Harris has also been portrayed as an aggressor, rather than a passionate leader. It is gaslighting to suggest that Harris is ridiculously or inappropriately angry when she is tackling issues with as much zeal as white male candidates do.

In the same way that Donald Trump and his supporters labeled Michelle Obama “angry,” they have begun to use the same language and imagery when referring to Harris. Obama was described by a West Virginia county employee as an “ape in heels,” and former Univision host Rodner Figueroa said, “Michelle Obama looks like she’s part of the cast of Planet of the Apes.” Both of these people fed into the vicious trend of racist, gendered attacks on Black women leaders.

The Trump campaign has already claimed that Harris is an angry Black woman and accused the Oakland, California-born candidate of being illegal. The same claim was made about President Obama.

Though I do connect to the racism that she’s experiencing, my opinion of her as a candidate is still complicated. She’s made big claims in the past about supporting Black Lives Matter and even advocating for police reform, but her actions have not always translated accordingly. She has a track record of being the “Top Cop”, as a prosecutor in a criminal justice system that has come down unjustly on Black people, specifically Black men.

Harris may have perpetuated out-of-line law enforcement tactics that have been deadly, possibly even contributing to instances of police brutality and prison overcrowding with a majority of Black men. She has also been accused of either doing nothing when it comes to cases of police violence or has even increased it in some cases: “While serving as attorney general in 2016, for example, [Harris] she opposed a bill to investigate deadly police shootings following the death of a stabbing suspect — shot 21 times by police — that sparked huge protests.”

I also know that, for years, Black people have been forced to make unfair trade-offs when working in an inherently anti-black system. There is a degree of self compromise that Harris, and so many others, have to reckon with. I don’t know how much Harris will lead the Democratic shift or merely be one of Biden’s passengers, but I do know that as a Black woman, it’s okay for me to feel a multiplicity of emotions when it comes to Harris.

Harris isn’t just a Black woman, she isn’t just an Indian woman, she’s not just a woman, or a candidate, or even a wife, she is an intersection of identities that all come together to make her a masterpiece of complexity and humanity. I love that she has flaws because those imperfections make her who she is. Black women voters don’t want to be reduced only to our Blackness or our womanhood when it comes to our political beliefs, and the same is true for Harris.

When people see me, I don’t want to be a monolithic conceptualization of what a Black woman should be, I hate feeling erased in that way. There have been too many unbearably painful moments in my life in which people have labeled me worthless because of my Black womanhood, instead of trying to get to know me.

As theorist and professor Kimberle Crenshaw has asserted in her studies on intersectionality, “I center Black women in analysis in order to contrast the multidimensionality of Black women’s experience with the single-axis analysis that distorts these experiences.”

I think it’s my right to both support and challenge her candidacy for vice president. It doesn’t make me part of the opposition or an unconditional supporter—simply an informed voter, which is something Black women rarely are allowed to be. We are often pigeonholed, forced to choose between loving a Black candidate and criticizing that candidate’s reputation or policies. It’s not a matter of who’s right or wrong when it comes to Harris, it’s about Black women deserving the autonomy to unapologetically feel what we want to feel about Kamala Harris, for better or for worse. 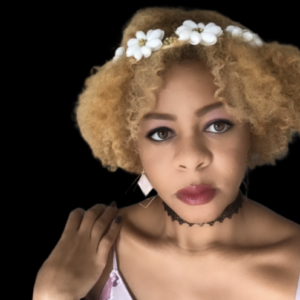 Danielle Broadway is a writer for Black Girl Nerds, activist and nerd of many trades and can usually be found in the garden or with her nose in a book. Currently, she’s a grad student pursuing her degree in English Literature but is truly in her happy place when she can geek out over the latest Marvel movie while snuggling a real or stuffed furry friend. If you’re also a hopeless nerd, follow her IG @broadwaynerdwrites, so she can talk nerdy to you and give out cookies.