At a time when remaining distant from others is actually encouraged by health professionals, the notion of relationships as we once knew them might feel, well, like a thing of the pre-COVID past. But I’m thrilled to report that love is still alive; like so many other essential things in our world, it simply looks a little different. I spoke with three couples who have rewritten the terms and conditions of their relationship due to the pandemic—whether staying strong amid separation, safely meeting IRL, or coming forward with feelings drawn to the surface by global uncertainty. Below, they explain how they arrived to where they are now, both physically and emotionally. (They also give some pretty great advice along the way.)

Kate, 26, and Albert, 31, moved out of their shared apartment in Boston and in with their mothers, sending Kate to New York City and Albert to Caguas, Puerto Rico.

On their first date

Kate: We had a totally classic millennial meeting on Tinder, in the spring of 2017. It was a Wednesday. The day of, at 3 or 4 p.m., I hadn’t heard anything from him, but I hadn’t texted him either. And I was like, “Ugh, I don’t know if I want to go on this date.” Then I texted him at 5—we were supposed to meet at 5:30—and was like, “Are we still on for this date or not?” And then he was like, ‘Can we do 6:00?’ We ended up going to a free art museum and walking around. Apparently, I was very nervous the whole time.

Albert: Extremely nervous. One of us said hi—the other one kind of made a gesture and smiled. But the date was super fun.

On moving out of their Boston apartment

Kate: We had lived together for just a year. Our lease was from September 2019 through September 2020. In March, Boston kind of shut down. We’ve been working from home for six months. And so [this month], we were like, “Okay, we both have our jobs. We’re both working remotely. So to a certain degree, we should take advantage of the fact that we don’t have to be in the same place that we work.” My mom lives in New York and Albert’s mom lives in Puerto Rico, so we were both like, ‘Wouldn’t it be great if we didn’t have to pay rent and we could save a shit-ton of money?”

Albert: We’re saving a good amount of money on rent and utilities, and there’s free home cooking. It’s [also] a rare opportunity to move in with your mother and not feel terrible about it.

Kate: Obviously, it was really difficult to make the decision to go live in different places. But we had also just spent six months only being around each other. So it was a good opportunity for us to be able to experience things and share those experiences while also not having to be around each other constantly.

Albert: I do feel, at times, somewhat guilty. We were lucky enough to keep our jobs, [so] we kind of get a boost in [the pandemic], an opportunity that we never would’ve had to just save all our money. Figure out where we want to live. Work remotely. The possibilities of us remaining remote seem to be increasing day by day, so that could also just change our lives completely.

On adjusting to living apart

Albert: It’s a weird, lonely feeling. The biggest [challenge] would be the distance and the ability to kind of communicate things that aren’t necessarily needed to communicate, but are just fun to yell at each other from across the apartment.

Kate: Obviously I can just send a text, but we’re not people who are obsessively texting each other. I can’t send him like, 20 TikToks, where normally I’d be like, “Ooh, come watch all these TikToks I have to show you.” You can’t send someone 20 TikToks. That’s just ridiculous.

Albert: I’m sending more memes. We see a lot of weird dogs here, so I’ll send her videos of weird dogs. We’ve only really been apart about 17 days, so we’re kind of figuring it out.

Kate: You take some stuff for granted when you’re just always around someone. I can’t show him that I love him by cooking him dinner, or touching his arm, or touching his back. I have to physically say, “I love you, I miss you.”

“We’ve never gone out together to a party where it’s like, ‘Oh, Matt and Ellie are here.’”

Ellie, 20, and Matt, 21, matched on Tinder in March, quarantined together in June, and currently live in separate apartments in Athens, Georgia.

Ellie: In March, my friends in our group chat were like, “Let’s all set our Tinder locations someplace different.” And I was like, “I’m going to set my location to Boston.” I’m pretty sure that night I just randomly matched with Matt. He didn’t realize that I was from Georgia at first.

Matt: We had a conversation, and then she said something and the conversation just kind of ended. I was just like, “Okay, that was fun.” And then I messaged her again the next day and we kept talking.

Ellie: We did a Netflix Party on Easter night, and then we just FaceTimed every day for a long time. I don’t know how the conversation started—where I was like, “Oh, maybe I can come up there at some point later on this summer, when quarantine is over.”

Matt: I’m just sitting at home, not doing anything. So I was like, “I could just come down there and see you at some point.”

Ellie: I was thinking I would just run into his arms. He would kiss me for the first time. It would be so romantic. But it wasn’t at all [laughs]. I went to pick him up at the airport, and I don’t know why, but I parked so far away. I walked in, and then I saw him, and it was so awkward. My face turned bright red. I gave him a side hug. After hours of FaceTime, I gave him a side hug. And then I was so nervous and I didn’t know where my car was, so I was just walking really fast in front of him.

Matt: It was funny because I was expecting her to be waiting in the car, but she was standing there, a pretty awkward distance from me. It was very obviously her and she waved at me, but didn’t walk towards me. I walk out to her, and we do the weird side hug thing. And then she says something about how weird it was that she recognized me with my mask on.

Ellie: I thought he was coming for, like, four days.

Matt: And then it turned into an entire month.

On slowing the spread while entering a new relationship

Ellie: The last thing I would ever want to do is spread coronavirus to another person. [When we met] I was like, “Okay, if he has it and it infects me, then at least we’re going to be in my apartment, not interacting with anyone, so the risk is low.” But he literally hadn’t interacted with anyone, and honestly, I hadn’t either.

Matt: The entire month, we literally only interacted with each other—we saw one of her friends for a picnic, and we went to her parents’ house once. When I got back home, I quarantined for two weeks.

Ellie: It’s also strange because we only started dating after the pandemic started. I’ve only met a few of his friends. I’ve never been to his school or gone to a college party with him or gone out to a bar with him. We’ve never gone out together to a party where it’s like, “Oh, Matt and Ellie are here.”

On Matt making the move to Georgia

Ellie: He had to go back home for an internship, so then we were doing long distance. It was so hard because he lived with me for an entire month.

Matt: I needed to get out of my parents’ house—I couldn’t stay there any longer. And so, I was like, where do I go? Ellie was super helpful and she helped me look for a place down here. The housing’s cheap, and I had money saved up from the summer.

Ellie: Also, he has a crush on me.

Matt: I ended up finding a nice place a 10 minute walk from her apartment.

“Everybody rolls their eyes when I say this, but it literally felt like gravity.”

Sabrina, 22, and Cierra, 21, were roommates and best friends before entering a monogamous relationship in July.

On starting out as roommates

Sabrina: We both went to Parsons. I graduated last spring—she’s in her senior year. We met two and a half years ago. I was just looking for another roommate. It’s so weird every time I tell this story. Our friendship was close very fast—she’s been like my best friend that whole time, basically.

On sip-and-paint and sexual tension

Cierra: We planned to spend quarantine together and did a week in our apartment, and then in March we went to Virginia, where my family lives. Sabrina stayed for a week. I stayed for four months. I kind of got my own self together, and when I came back to the apartment, I was expecting it to be awkward because the last time we were together, we were in a fight—a pretty big fight, too.

Sabrina: I spent the rest of the four months bouncing around, so I was in Philly with my mom, and then I came back to New York city for a bit, then I went to Miami with my dad.

Sabrina: The really funny part about this, though, is that [while] we were having all these repressed feelings, we were literally making any excuse to touch each other. So, what was the first thing we did [when we got back]?

Cierra: We were talking about activities to do in the house. And I said, “Sip-and-paint.” And then I was like, “Wait, let’s do a sip-and-paint, but with our bodies instead.”

Sabrina: So we were just painting each other’s bodies with glow-in-the-dark paint, drinking Hennessy [laughs]. Now we look back on it, we were just…

Cierra: We were trying it.

Sabrina: We’ve always been comfortable touching each other, but it was very different when we came back. Everybody rolls their eyes when I say this, but it literally felt like gravity. I don’t know. It was so weird. It’s something I haven’t fully experienced before. 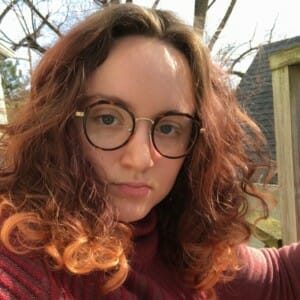 Tess Garcia is a freelance writer, yoga instructor, and reggaetón loyalist. Her erratic Gen Z perspective has appeared on websites like Bustle and InStyle, but she’s currently searching for a full-time editorial job (wink, nudge).