I pressed the lock screen and slammed my phone down on the coffee table. I was two seconds away from wanting to delete the dating app from my phone. The humdrum of swiping right—but more, in my case, left—had me feeling drained and bored.

Why did I do this to myself?

Why did I put so much of my want and need to be with someone into an app? It felt like one of those fortune teller machines on a beachside boardwalk—the kind that could tell you your future for a measly five cents. It seemed worth it to try, to find out what my life might look like tomorrow or a year from now.

I wanted to know if there was a chance for me. Being alone, living alone, caused me to spend more time wallowing in how the air felt empty in my tiny Boston apartment. Small moment of laughing out loud at a scene in a show, felt as if my sanity was borderline maniacal, because there was nobody to laugh at the joke with me. Fruits spoiled faster, food bought and prepped for weeks of isolation came and went; stored to only be trashed because one mouth could not finish it fast enough. After my last heartbreak, I saw myself staying perpetually single; now I wanted to find my forever soulmate. My anxiety of waking up every morning as the slow days of March loomed peak pandemic made me thankful that I was here, alive and breathing.

Teaching remotely gave my days their shape, but they soon became monotonous. I wondered if this was it: I hit the water kettle on, popped toast in the oven, and set up to press a smile on my face, looking at ten-year old fidgety faces staring back at me through my computer screen. My students now had to greet their teacher from inside their own homes, instead of from inches away, as they had before. I had to be strong for them, but who was being strong for me?

When the exhaustion got the best of me. When the tears creeped in the corner of my eyes as I curled up on my side of the bed at night, the rest of the sheets begging to be touched by anyone but me… feeling as cold and as distant as I did. I thought about how I felt, not connected to anyone. How for almost the last decade, I had been okay with being single forever.

I entered my thirties wanting to live a strong woman’s life, with the freedom to travel: sunbathing on the beaches of Tulum, kissing a French man outside the American bar near the Moulin Rouge. I wanted to be on my own, jumping from casual fling to fling. But in truth, I spent more time fearful of rejection, and not feeling good enough for anyone. I stared back at my phone. I pulled it toward me, and bent it slightly so it had my face in view, reflecting back at me. Sighing loudly, “All right, you win.” I tapped the app and began swiping.

Lining my lips with the fuschia lipstick, I pursed them together. Prior to pandemic, I had balked at putting on make-up to go out. At times, it felt like a chore. An easy façade, another layer of shield on an already cracked exterior. My friends “ooh and ahh’d” as we all crowded around the pre-pandemic living rooms of whoever was hosting that weekly girl’s night out. Celebrating each other’s confidence, as if stepping out to finesse all the expected men, who hadn’t met us yet, and who would be happily unexpecting such presence. When in reality, it ended up being us ladies, venturing out to a bar, finding ourselves crowded around the male bartender, who flirted his way into our wallets, and took a shot with us in order to make us older millennials not feel so desperate for attention. However, this moment felt a bit more controlled, I was only walking into the next room.

Lining up my couch with perfect pillows, lighting the softly scented vanilla candle and arranging my computer so that the light from above would give me a natural glow. I was in control of the ambiance. My glass of rosé gently caressed my tongue as it made its way down my throat, adding another layer of calmness, and yet my nerves did not quite dissipate.

Even though my virtual dating altar was set, my feet shook. My fingers tapped. Straight back, shoulders down, chin high. Do I have something in my teeth? Do I have lipstick on my teeth? I turned on Photobooth for a once-over. Where do I sit to be centered? Do I turn my head to the right or the left? Which is my better side? This top is all wrong. Too revealing? Not revealing enough? My head was beginning to pound. I took another sip of wine. It was less helpful this time. What if he did not like what he saw? I was eager for him to like me. Why was I eager for him to like me?

He was different from those I had swiped on before. When we talked by phone, he spoke Portuguese patiently as I offered a butchered “bom dia” perhaps overly influenced by my high school Spanish. He yearned for where he grew up in Brazil and talked about it as if it was something out of a picture-book, full of color, in a way that left me wanting to dance among the waves on the beaches there. He whispered simple phrases that made me miss being pushed up against the corner of a crowded room and forcing ourselves close together just to hear each other. We made a plan to meet, by Zoom.

What if he doesn’t like me? What if these conversations could not translate the same way over a computer screen? Opening my home to a stranger this way made me feel vulnerable. This was new. Away from the conversations that we kept to the safety of a text, but moving to a virtual date? How was this going to be any better? If anything it felt worse. When you met someone in person at a restaurant, there were at least known distractions when you sat across a table. Here there was no waiter to interrupt the awkwardness. You could not reach out to each other to let the other know it was going well; that there would be a date two. And most of all, you had to stare at each other.

The forced eye contact left my heart pounding. I could so easily get lost in someone’s stare. Maybe, I could spotlight my own face, so I am only staring at me. Would it be rude to keep my video off? Do I need to invest in a ring light? Why did I not realize before that pink does not really pop the same way through a blurry screen? I wanted to bail immediately. For someone who absolutely hated dating, this felt like a nightmare. My tapping became louder. I closed my eyes. You are home. You are safe. If you want this, then you have to let it happen. “Hello,” he said, smiling.

I grinned back and took another sip. His face leaned to the side, his glasses shining the glare of his computer screen back at him. His hair flopped over his forehead, and he gently brushed it aside. 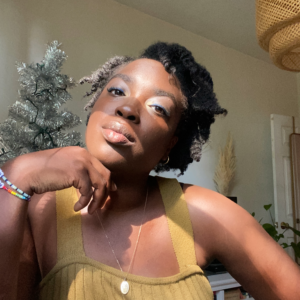 Now a retired lifestyle influencer, Gabrielle (Gabby to most) is a Boston-based elementary school educator and creative, who dabbles in poetry and personal essays while living what she calls her Renaissance Womxn life.