If I may be so bold, I like to think of myself as a still life connoisseur.

I’ve been dabbling in still life arrangements since 2006, when I would set up scenes of inanimate objects and then draw my best interpretation of them in colored pencil. Those still lives often consisted of not-so-complex arrangements of fake flowers, tarnished pewter pitchers or fake fruit — basically anything that could be found in your grandmother’s attic.

Experimenting with fruit specifically didn’t really come into play for me until later in college, when I was struck by designer and art director Leta Sobierajski’s Adds/Ends series. She spray-painted fruit then shot them against contrasting colorful backgrounds. I liked that it was different from the classical still lives I was used to seeing. Shortly after seeing Leta’s work, I couldn’t wait to spray paint fruit for a still life of my own.

This was my first Instagram fruit still life on record, circa 2014:

Four years later and I do it for a living. And what a time to professionally still-life: We are in the midst of what feels like the golden age of fruit still lives on Instagram.

My theory is that this trend stemmed from #thingsorganizedneatly fatigue, which then pushed people to venture out and and try new things on Instagram, like Freakebana, which is the “the art of arranging whatever you want,” as coined by The Cut’s Editor In Chief, Stella Bugbee.

I also think that fruit is more accessible than, say, a designer shoe, which allows it an “anyone can try this” approachability. Accidentally bought a bruised banana? Apple’s got a worm in it? Avocado ripened too fast? Make a still life out of it. Fruit is also malleable (you can cut it, carve it, paint it, eat it — although when you work at Man Repeller, you have to guard the fruit with your life until it’s officially finished posing or it will be gone before you know it, a core or pit left in its stead) which means the creative experimentation is endless. And lastly — though perhaps most obviously: fruit is super colorful. Instant like-bait.

As is common in the typical Man Repeller (and Edith Young fashion), I’ve broken down the different types of fruit still lives that I’ve noticed popping up around the internet. My list is as follows — but don’t forget to chime in in the comments with your own.

I’m not entirely sure who officially started this particular style on Instagram, but I do know that the recently Oscar-nominated film, Call Me By Your Name, channeled a similar aesthetic in its set design, making it feel all the more “in season.” Whenever I see this style of fruit still life, I am immediately transported to summer mode and imagine myself walking along the coast in Antibes, France.

I feel like Rosie Assoulin started making faces out of inanimate objects and posting them to her Instagram at least a year before this trend started appearing everywhere. Sometimes vegetables are used, or even seashells. If Picasso had an Instagram account today, I’d like to think that he would experiment with fruit faces.

I started taking note of blurry fruit and flower photos once Mansur Gavriel started posting them on Instagram, juxtaposing them with their deliciously color-coded leather products. This style of fruit still life has this cool “we tried, but didn’t really try” vibe that feels simultaneously relaxed and elevated. They also exude an element of nostalgia, like disposable camera snapshots from a hazy summer night.

These still lives tend to be accompanied by other items such as magazines or some sort of beverage. Maybe there’s a plant peeking into frame. They feel the most naturally-styled — as though you were going about your day and just so happened to notice how pretty your desk setup looked in that moment and wanted to capture it. They are beautiful without “trying too hard.”

First we saw flowers in basket bags, then we saw fruit piled up in fabric market bags, and now it’s all about fruit in clear PVC bags en route to both runway shows and the grocery store. The PVC bag trend as a whole has made me really nostalgic for the 90s; it reminds me of a bubble backpack that I received with a subscription to something silly (like Lip Smackers) when I was eight. I don’t think I carried around clementines in it back then, but apparently I should have.

I picked up two pieces of marble fruit from a thrift store over three years ago before ever seeing them on an Instagram feed. I had never seen anything like them and thought that they were fun. Lately, they’ve become a thing, which is super cool (Mom! I’m trending!) but has also made them pretty hard to find/a little expensive when you do actually find them. What I like about them, though, is that they last! (Unlike real fruit.) So consider them an investment in the world of fruit props. Even Leandra was swayed by their whimsical (yet pointless) charm. They’re hard to resist!

Sometimes when you’re in the middle of making the magic happen on set, you snap a few behind the scenes shots that end up looking effortless and in some ways cooler than the final result. When this happens, go with it.

The most visually-stimulating fruit still lives of the bunch, to me, are those that are professionally styled. They give me a reference point for my own work and serve as the highest level of inspiration. If you’re looking for pros to follow: Freelance photographer Stephanie Gonot and New York Magazine’s Bobby Doherty have taken the fruit-centric still life to another level of traditional-meets-modern art. If this fruit-on-Instagram-thing is a trend, their work — along with the fruit-focused cover of Gather Journal’s Winter 2018 issue — will surely outlive it.

Okay, time to talk favorites and which still life you’re most like! 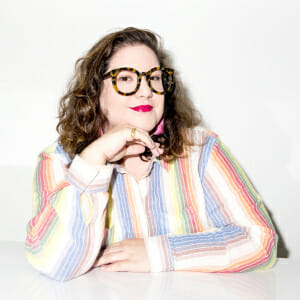 Emily Zirimis is the Visual Manager at Man Repeller