“Nobody wants bad vibes in their life,” says Paul-Louis, handsome surf instructor and recreational pube admirer, towards the end of Girls very last season premiere. It’s the kind of assertion that sounds true, obvious. But like the dozens of episodes before it, these 40-odd minutes counter the claim.

It seems these girls, these women, these Rays, these Adams, all of us — we do want bad vibes. We crave them. We yearn for the drama. We don’t always want to improve or grow, even when we know it would do us some good. And just when we resolve to make the decision, to maybe get an Airbnb in town and write and heal and learn to love the beach, we’re reminded that our realities are not our own to define and narrate. It’s the hardest lesson. Five full seasons and one episode in, the Girls are still just beginning to learn it. We never have all the answers; obviously. But if you’re game, here are 23 questions we can puzzle over together.

1. When did Marnie become a person who pees with the door open?

2. How many copies of The New York Times would you buy if you nabbed a Modern Love column?

3. Are you more of a dumpling or a woman at this point? Please discuss.

4. But is that how Shailene Woodley gets her glow?

5. What do the teens call it when someone brushes you off by saying this: “In fact, I want to spend more time with you. I just want some of that time to be apart.” Ghosting? Breadcrumbing? Trumping?

6. Should we all take a 30-second dance break for Justin Bieber, “Baby,” if only because Marnie and Ray can’t stop prefacing every damn sentence they utter with it? Okay, obviously, yes.

7. When Marnie painted her nails, do you think there was a runner-up color or was she just like, “Yes, this garish shade of Barbie pink is what my online therapist thinks I need.”

9. What do you call the cutouts in Hanna’s sweatshirt? Do you think they facilitate armpit breathability, because I’ve always thought that’s what I’d take on Shark Tank.

10. Who makes Hannah’s sunglasses? Really, I must know. Serious respondents only in the comments section.

11. Do you think Jessa ate that entire container of yogurt?

12. There are two kinds of women in this world: those who can pull off pigtail braids and those who cannot. Which kind are you?

13. If you wanted to get out of physical exertion, what would your most creative medical excuse be? I wouldn’t go with “front arm” injury, personally. But, like, I wouldn’t go to surf camp.

15. How do you secure such a massive perimeter for your butt thumping on a crowded dance floor?

16. Did Paul Krugman ever expect to score a mention on Girls for his socio-economic anxieties?

17. How many hours did it take Shosh to color-code her books?

18. Under what circumstances would you let a surf instructor who would rather be in the Bahamas lick your eyeball?

19. What would Marnie and Desi merch even look like? I feel sure paisley print would be involved. Sketches accepted below.

20. Is it ever appropriate to fuck someone on Kilimanjaro?

21. Could we count the number of men who’ve ever apologized to Hannah and meant it?

23. How much of Hannah’s entire existence was summed up within her expression during the last five seconds of this episode, that brilliant transition from movie-soundtrack glee to stone-cold realism? 99 percent, I think. At least. 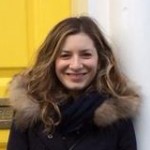