I May Destroy You is a perfect show. I just can’t finish watching it.

I watched nine episodes of I May Destroy You before I had to hang up on Arabella—the show’s protagonist; a writer currently under contract to complete a book while simultaneously dealing with the trauma from multiple sexual assaults. The show, based on the true life experiences of Michaela Coel; a writer/actor/creator with god-like cheekbones, left me stripped each week, screened, then bludgeoned.  Would you believe

I too am a person

and is currently under contract to complete a book

that centers multiple sexual assaults and PTSD and, that book is a memoir.

I think you can believe me

the way I did during episode five.

Arabella learns that an arrest has been made thanks to a semen sample on her clothes from the night she was assaulted. We’ve seen this exact scene hundreds of times on SVU. We know that soon, the sample will be deemed too weak and the case will inevitably close. But this is not SVU. This is someone’s life.

I’ll let you know whatever it is you want to know about me, but not how it changed the way I breathe. I’m too busy

being ok. Or working. Or laughing. Or reading. Or disappearing.

“Are you the po-po or are you the Rape Busters?” Arabella asks the detectives with every tooth in her mouth showing—it’s as if her body leans into decorum like a default setting. Like she’s saying I know your job is supposedly to help me but let me show you why I’m worthy of it.

She slides her seat back under the table      I have some self respect.

Her shoulders are slightly adjusted forward.            I can take care of myself,

It’s clear that her body and what’s coming out of her mouth are at odds. Still, the detective praises her for reporting what happened so quickly. This good girl pat of approval allows Arabella to clasp her hands to her chest in what feels like both a mocking and genuine tone as she responds “Oh guys… it’s my civic duty, yea. Felt like something wasn’t right. Who am I gonna call?” and then she turns to her best friend Terri, who has sat by her side during this whole scene at the police station, to finish her sentence. Which she does, exasperatedly, with “…RAPE BUSTERS!”

I feel SEEN. Respected even. The way I’ll craft a comeback to avoid being asked am I all right. It’s like, I’ve laughed in rooms with people who’ve placed hard hands on my mother, created inside jokes with their palm lines. But it takes me three weeks to watch the next episode. It takes me three weeks after that to get to episode nine. It takes two more weeks of not watching at all to decide I won’t be watching again.

That Michaela Coel stole me?

You have to; I’m an essayist.

Or as Arabella’s friends perceive it—alive.They say so many nice things about her freeness to keep her

in a constant performative state. I mean, most writers are constantly performing. The problem is that Arabella just can’t perform the victimhood she needs to perform well. For multiple reasons, but I’d be remiss not to include the main one: she’s a dark skinned Black woman. She’s quick-witted and bold and talented and gorgeous and funny and smart and because of this, she’s expected to know better. Because of this, her drug dealing ex can shame and question her about her own rape, her publisher’s can know what happened to her and still expect her to produce quality work and meet her deadline, her best friend can try to remedy her trauma because she feels guilty for allowing her to be left alone. Arabella’s perceived freedom is a factor in why she is expected to move on so quickly. She’s talking about it, she’s entertaining men again, she’s even joking about it.

Or as my friends perceive it—carefree. They say so many nice things about my freeness to keep me

in a constant performative state. I mean, most writers are always performing. The problem is I just can’t perform the innocence I need to perform well. For multiple reasons, but I’d be remiss not to include the main one: I’m a dark skinned Black woman. I’m open with my life and drug use, quick-witted and bold and talented and gorgeous and funny and smart and because of this, I’m expected to know better. Because of this, I say thank you when my vulnerability is praised instead of pay me. This perceived freedom is a factor in why I’m expected to move on so quickly. I talk about it, I downloaded a dating app, I’m even joking about it. The secret is, you just smile through it. Rather scribble the memory than have to face the family; rather harm us than feel them question my motives.

“I don’t know what it is, but since we got back, you been trippin’.”

“I’m not yelling!” I say, & the sentence lasts for weeks.

7. Parable as point of view

In Melissa Febos’ memoirs Abandon Me she writes, “Look at me, I say, No, look over there, at my image. Ain’t this the point of doing any sort of autobiographical work; to never reveal the full complexities of a person but expose our representatives?

Ain’t Arabella made in Coel’s image?

8. Parable as people for the ethical treatment of animals

Kwame—Arabella’s other best friend (and my favorite character) laid face down on a bed fully dressed, unable to move, with a man’s chin buried into his fur at the end of episode 4.

I rewinded the scene thirteen times.

“Maybe we are masochists” a friend tells me when we talk about the show.

It’s something about the word MAY in the show’s title that is threatening. Torturous. Looming.  You may cry.

You may become emotionally invested too soon.

that for two ½ years I slept on a raggedy futon and fucked up my back. When I was a kid, I laid on my side a lot—always facing a wall. I was facing a wall the morning of—

When Kwame hops up and darts out of the room, his back still slick with something—I’m reminded of the texture of soap on my palms as I scrubbed them swollen. His mouth stoic, but his eyes—in the wilderness. It always looks as if he just finished crying. He calls Arabella—the person who wrote this but didn’t—on the street. Coel’s truest gift is her imagination; the way she lets fear and intimacy mixed with a splash of aimlessness lay on top of one another. Watching it feels like taking Windex to my mirror and lets me know I’m not crazy, or confused. I just ain’t have nobody to call.

“So many different types of sexual assault you know.” Arabella mentions as she’s walking out of that police station. She creates a small list for clarity,

“Didn’t even know you could get raped in the mouth before this.”

What about “touching someone’s body early in the morning and pretending to be asleep when you realize they’re awake?” I interject. “What if you’re just kids?”

“How old” They keep asking.

“One small, one teenaged.”

All the answers are yes.

9. Parable as it could be worse

“Um… did they, penetrate…” during the middle of episode 5 a new cop stammers through the words as Kwame tries to explain—to name—to report—the thing that happened to him. “Because there’s a big difference between sexual assault and rape.”

“What do ya’ll call this?” I ask a therapist.

“I gotta tell you something,” I tell my mother.

Arabella’s body language on the show is often contained, stiff, crumbled up like a piece of paper whether she’s sitting in a chair or lying on a bed—she feels thin

—as the blue blanket on the bed that morning, thin as my cuticles as I bite down to the white meat of fingers for almost two decades.

14. Parable as self sufficiency

Is it weird that hands are my favorite part of the human body. If I had to curate the perfect pair; I’d have ten of them at once, swatting away all intruders

15. Parable as colors of the rainbow

I don’t know how it ends for Arabella or Kwame, but in order for me to finish all twelve episodes of this show, I would have to be something other than a traumatized girl who uses humor in order to be less traumatized—and I am not. I can assume it ends like it always does: a revenge plan of sorts or a hope for justice that slowly dwindles into you’re so strong… we’ll get through this together… you are not alone… I’m sorry that this happened to you… I wish there was something I could do to help… this is not the end of your world. Or maybe it ends with Coel making Arabella disassociate in order to stop crying in public. Maybe she finishes the book and becomes one of the most skilled tv writers of our time. Or she flips the chair this time. Or maybe someone dies. Maybe some shit gets broken. Or maybe someone half-heals and Kwame becomes okay with locked doors again. Or maybe there’s a really, really good joke. Or maybe there’s no end at all, 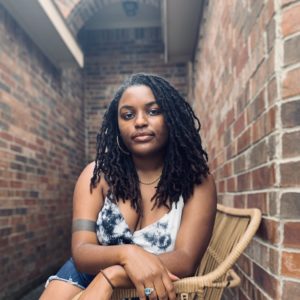 Kendra Allen is the author of When You Learn The Alphabet, winner of the 2018 Iowa Prize for Literary Nonfiction. Born and raised in Dallas, Tx, her poetry collection titled The Collection Plate is forthcoming from Ecco Summer 2021. She’s rarely on Instagram but sometimes she tweets @Kendracanyou.