On Tuesday, August 6th, the book of the season was released like 30 to 50 feral hogs: Trick Mirror: Reflections on Self-Delusion by Jia Tolentino. And the hype! Has! Been! Palpable! Uncharacteristically, I’m not even annoyed yet. If you don’t know Jia, she’s the New Yorker columnist behind last year’s seminal Juul deep-dive, this year’s viral athleisure investigation, and this important academic look into people begging celebrities to kill them. Or maybe you’ve read her Twitter, which is a work unto itself.

To the very pretty girl who came up to me at the bar at Joyface last night & said you liked my writing, I want to apologize for being extremely deep within a "bit" that involved me being a sort of "screaming possum" & not fully returning the focus & affection you deserved

I’m only halfway through her book and can already vouch for it. I’ve ached and laughed and aged several years, and not unproductively. She really is, as her book jacket explains, “what Susan Sontag would have been like if she had brain damage from the internet”—a tagline I’ve read aloud to several friends, all of whom share my amazement (and envy?) at its aptness. I’m internet-damaged too! Maybe stars really are just like us….

I’d like to think I’m unique in my appreciation of Jia, but I’m joined by seemingly all of New York and New York media, who have collectively agreed on her genius. Look at all the people lined up for her reading in Brooklyn this week!

The media blitz surrounding Jia’s book release over the past month has been thorough. I’ve hardly thought of anything else besides my own inadequacies. The Grubstreet Diet! The New York Times By the Book! The Into the Gloss Top Shelf! The Longform Interview! The Vanity Fair profile. Someone on Instagram referred to her recent circuit as “the media EGOT,” which is genius and true. And believe me when I say it’s the most pleasant kind of onslaught, like when a side of fries turns out to be a giant bowl.

There’s even a meme about it:

(Which are you? I want to be Grub Street Diet or Profile of Jia’s Dog, but I’m probably Creative Independent Q&A.)

Anyway, whether you’re just getting to know Jia Tolentino (the warmest of welcomes), or have been following the push and need your Jia content in one place for proper aspirational bookkeeping, please enjoy the poetry that is her media EGOT below.

And as the saying goes, may we live long, prosper, and—writers and aspiring writers—never waste energy comparing ourselves to her.

Jia Tolentino Chases Spicy Rigatoni With Karaoke and Too Much Fireball

“And then I sincerely regret to say that we went to Sing Sing — the four of us — and fully did karaoke for six hours, until 2 a.m. Six hours of karaoke on a weeknight: It was objectively upsetting, and so was consuming large quantities of Fireball at the age of 30. And yet, there we were.”

“Now, I think if I could articulate a goal for myself beauty-wise, it would be to look pretty enough to like to look at, the way that I like to look at my friends, but nothing more.”

“When I like a book, I carry it around everywhere until I finish it, like a subway rat dragging a slice of pizza down the stairs.”

Everything Jia Tolentino Touches Turns to the Gold Standard

You have to listen to find out!!!

“First of all, there’s a subtitle only because apparently you need one to show that a book isn’t a novel, which I didn’t know. I would much rather not have a subtitle. I think they’re cheesy. I think epigraphs are really cheesy, and I think subtitles are cheesy.”

Jia Tolentino Makes Sense Out of This Nonsense Moment

“What can seem contradictory is that while her writing is obviously informed by a searing intelligence, when she appears in it, it’s often as a blank-brained stoner speaking in slang.”

Jia on Writing for the Sake of Writing

“I prefer to be extremely busy or to be doing absolutely nothing at all. But I actually think that’s a bad tendency and I’m trying to work on it.”

Luna Tolentino: The Next Big Dog

“Luna is large like a mountain, but shapely like a pear. Her left ear sticks up straight, while the other flops down as if it has given up on life and cartilage. She has a Zorro mask on her face, but none of the fleet-footed energy of Antonio Banderas.”

Jia Tolentino Doesn’t Have all the Answers

“The most obvious difference between Trick Mirror and her online writing is form, as she pointed out to me in a recent phone interview. ‘There’s a bagginess to these essays,’ she said. ‘They’re kind of baggy and I wanted them to be baggy, and the New Yorker does not allow that, for good reason, because you don’t actually want baggy essays.'” 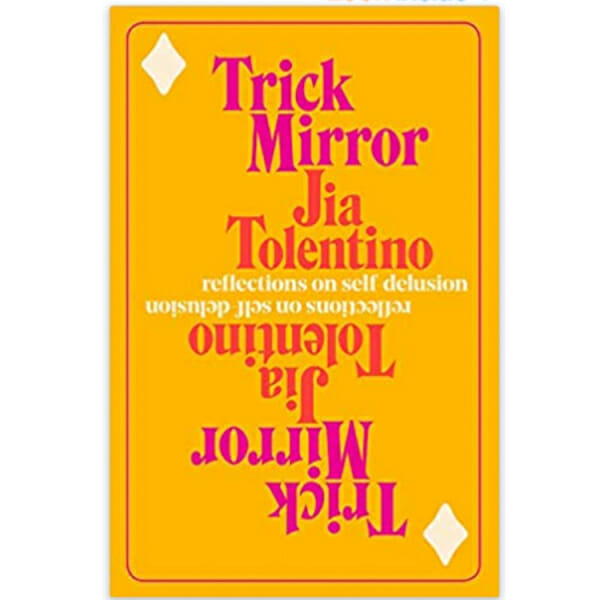