This isn’t a brag or anything, but I am unfamiliar with the naked dream that everyone else always talks about. I’ve never had it. Anxiety, yes. Nightmares of nudity, no. I’m not some fearless exhibitionist, although my building neighbor might argue otherwise (curtains are a two-way street!). Instead, I am much more stressed out by reality — the one during fashion week, where I stand before my closet like a deranged loon and declare that despite the army of clothing before me, I have absolutely nothing to wear.

Wah, wah, wah. Throw a bagel at my head if you must.

During this time the hyper-active trampoline mouse inside of my stomach jumps higher than ever while another in my chest recommits to its dreams of being a professional drummer. My can’t-get-dressed anxiety can be so profound — especially before the early morning shows — that there are times where I would much rather leave the apartment as naked and pink as a mole-rat.

What ends up happening is that I leave in a weird outfit I hate. Then I spend all day feeling self-conscious about it. But this fashion week, I took a different route. I straight-up copied someone.

I’m in a group text with Allure’s Accessories Director, Nicole Chapoteau (that was a brag). On the first day of fashion week, I panicked while everyone was running through their outfits via iMessage — these friends do Full Looks. Nicole threw a curve ball and said she was just doing jeans and a white tee shirt. Oh.

The next day she beat me to it, only her instructions were a bit more cryptic: jeans, clogs, white pirate shirt. (Pirate shirt??)

“The shoulders are cut out,” she replied.

Boom. I had that.

Like happy couples always say of their courtship, from that point, it was on. Every morning Nicole would text me what to wear: a slip dress and a white tee, a striped oxford with track pants, black wide-leg trousers and a black tank with big earrings. There was one day where I chose the look — it was the only outfit I had pre-planned (a different striped shirt, wide linen pants; she did great), and there was another day where we had a miscommunication: The group chat members, including Shiona Turini, were detailing their individual outfits for the shows head. Nicole said something about white eyelet and My Fair Lady; Shiona wrote back, “white suiting is the theme of the day.” I saw Shiona’s text, missed Nicole’s cues — I was distracted by a mention of velvet!; assumed Shiona was assigning our outfit, realized I was late and so white suiting it was.

Other than that, we were synched. And as a result, I didn’t have to think.

It wasn’t until this experiment was confirmed as a story that I began to consider how little I’d been stressing about my outfits while mirroring Nicole. Just as I would in a workout class at 6:00 a.m. or a cult (same thing), I just did whatever I was told. It reminded me that dressing doesn’t have to be such an ordeal. But it also brought up a few other points.

Nicole and I have very different styles. For one thing, hers can be described as cool. She takes risks, likes volume, plays with shapes. She’s creative with draping, belting and layering. She accessorizes like its her job — oh wait, it is. Me, on the other hand? I dress preppy. I hate that word, but man, do I love a cable knit. Collared shirts. I will year-round the shit out of nautical stripes. This challenge was a way to step out of my comfort zone. It reminded me that just because you’ve already made a body dent in a beanbag chair does not mean you can’t go sit on the purple chaise lounge.

On white suiting day, my midriff was completely exposed. (The Shiona influence.) I would never have done that on my own but I figured…why not? AND I LIKED IT.

I’d previously declared slip dresses “not my thing, not my look,” yet there I was, wearing one. Revived a dress from my closet’s graveyard depths. I’D DO IT AGAIN.

Because Nicole and I have such different styles, our wardrobe mainstays differ. Which meant I had to either get creative with her instructions (for one look I borrowed a pair of Adidas track pants from my roommate, Lev, who would not wake up so I had to leave the house and them have them messengered to the office — dedication) or get creative with my own closet.

Trying to find my equivalent of what Nicole was wearing reminded me that despite what I complain about every day, I do own clothes. I dug out so many things that I had forgotten — things that were pushed to the back by my own front-of-closet mindless routine.

It was liberating and oddly thrilling to dress unlike myself. Once you declare your style, it can be easy to get too literal, too rigid, and almost become a parody. Uniforms are helpful but even private schools allow free dress days; why not give them to ourselves? By the end I felt like I was just getting going. Nicole, rightfully so, was probably tired of dressing for two (four if you count her young daughters), but the whole thing reminded me that you’re supposed to have fun with your wardrobe. To make mistakes. That you can try new things without an excuse. 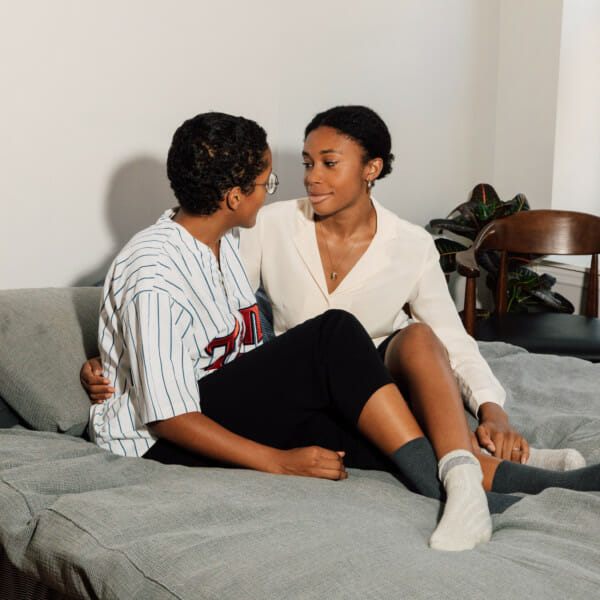