Opal Lee has been campaigning to make Juneteenth a national holiday for years. Photographer Antonio Chicaia visited her yesterday to take her picture, and talk about her history with the upcoming holiday and her plans for this year.

We had big Juneteenth celebrations in Marshall when I was growing up. We’d go to the fairground. It was like Christmas or Thanksgiving to be able to go on the 19th of June to celebrate freedom. I didn’t know much about freedom when we came to Fort Worth.

Starting around 1974, I went to Juneteenth celebrations in a tiny little place called Sycamore Park between Vickery Street and Rosedale Street—30,000 people, 10,000 people a day for three days. That was a glorious time. Our historical society had some educational material that we took to Sycamore Park. I don’t think many people noticed it, though. They were having such a good time.

I have three boys and a girl. The girl’s the oldest. She’s about 76 now. Her brothers are two years younger—74, 72. I lost a child. All my boys served in Vietnam at the same time. They all came home, but I will always believe my youngest son came into contact with Agent Orange. He was paralyzed before he died. He never got a VA benefit. He was honorably discharged, never got any medical attention from the VA or anything. Nothing. But water under the bridge.

I taught for 10 years. I love teaching. I tell you, I taught so long I was beginning to act like them kids. Then they give me another job. They said: “You’d be better at doing the social work.” They called it “visiting teacher,” but I didn’t have to teach nobody. I had to find out what was wrong and keep them in school.

I was invited all over the United States. I went to Shreveport and I went to Texarkana and Little Rock, Fort Smith, Denver, Colorado, Colorado Springs, Madison, Wisconsin, Milwaukee, Wisconsin. I went to Atlanta and to North or South Carolina. I’ve been to Virginia. I’ve been to over 20 cities so far. Austin, Texas, all these places, making people aware, some who never knew anything about Juneteenth. I’m delighted that Juneteenth is getting some momentum.

This year, for Juneteenth, we’ve already done a flag raising, and we’ve had our breakfast of prayer. Now, you’re not to confuse our breakfast of prayer with a prayer breakfast, where you sit down and eat a lot of food. We are planning a caravan that will start downtown at the Convention Center on Commerce. We’ll go to Lancaster all the way to Will Rogers Auditorium, and that will be two and a half miles, to symbolize that slaves didn’t know they were free for two and a half years after the Emancipation. I’m going to do the walking and everybody else is going to be in their car. Then, when they turn around, they’ll come back, and we’ll have some food trucks, and people can order, get their food, all that kind of good stuff.

What I’m seeing in the protests right now is that it’s not just black people or white people, it’s all kinds of people coming together. And this is what I dream for Juneteenth—that all kinds of people will come together, that we will celebrate freedom from the 19th of June to the 4th of July. If we put our collective stuff together, we can make this the greatest country on Earth.

As told to Antonio Chicaia. 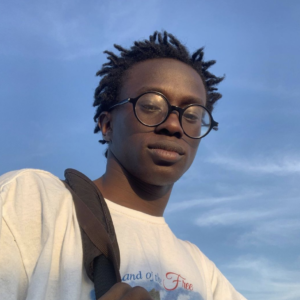 Antonio Chicaia is an Angolan-born photo-based artist currently splitting his time between Austin and Houston, TX.