For “Whatever You Want” week, Beth Sacca, photographer and member of Team MR, reached out to photographer Steven Molina Contreras. Born in El Salvador, Steven captures his family, himself and the immigrant experience through a staged, documentary lens.

I’ve recently watched, alongside everyone else, the consequences of time spent indoors—of time spent in a demanding solitude. We’re all being asked to weigh the safety of our loved ones and those we see in “limited” ways. The most visceral interactions I’ve had during the past few months have been with my family. While my artistic practice focuses heavily on notions of home—and uses my family’s narrative to speak about the broader experiences of immigrant households, at home and abroad—this forceful push to return home has nonetheless forced me to abruptly relive experiences from childhood. It’s as if my consciousness dug deep, and resurfaced experiences I haven’t lived with or thought about since my childhood in El Salvador.

I set the scene: A cramped, concrete-built room, one small window, and a sheet-less blue mattress. In the room is my older sister Yeemy, alongside my female cousins, and we’ve all begun to hang out and play a game of dress up. I, as the only boy in an all-female environment, have become their “muse.” In a rush, I remember the transformation: the laughs, the heels, the utter enjoyment of what was a brief moment but felt like an eternity. I was becoming something else—and in a way, becoming more like them, all in a patriarchal, “machismo”-led culture. Why would this memory present itself to me now? Why does it arrest me now more than ever before?

In a way, I believe I was craving to be my sister’s muse once again—to feel the exhilarating joy of letting her turn me into something else, and, once finished, feeling like we’ve gotten away with something. With this sentiment, I took to photography, and the studio, and referenced the work of Paul Mpagi Sepuya, to set the stage for us once again, to fulfill the memory for the both of us. Often, in my own work, I interact with the camera as an additional member of my family unit, acting both as a voyeur and as a human presence, collaborating with my family to make depictions of ourselves that work towards our narratives.

Never had I been the one to be transformed in such a manner. Under my sister’s subtle brush strokes, glitter applications, and artful touch, we transported ourselves back in time. We pushed our relationship towards the future, and I came to realize my need to photograph this—to relive it in a new manner, the childhood experience of us in El Salvador. In that hot, cramped room, I experienced what I now consider one of my first and purest “queer” experiences. It was full of joy, comfort, and secrecy, but most importantly, childlike support and love from my older sister. It’s as if she saw a part of myself in her innocence, and it buried itself into my subconscious until I needed to see it once more, to understand who I would become.

In this support, I came back to her, to elevate and work through these visual depictions of our past, to confront the changes I wanted to see in myself in the present/future, and to join in solidarity the secret experiences kids like me had, with women who had raised them. The application of makeup on anyone is not necessarily seen as a revolutionary act, but to me, the images we’ve made during this time validate an experience that at the time was life defining—and for many, including myself, can still be seen as an act of revolution. 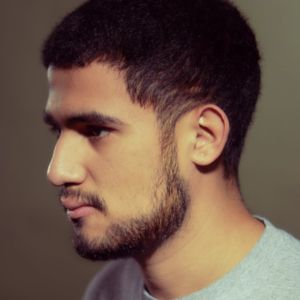 Steven's work addresses how immigrant families reclaim the land and images in which they are portrayed. Through a staged documentary approach, he recontextualizes the different narratives that exist within his images and pairs them, in order to reveal an emotionally evocative truth to himself and his collaborators—his family. (Photo by Will Pippin.)