If I had a nickel for every time I’ve been tempted to wrap myself in a blanket like a miniature hot dog and wear that out of the house instead of putting on actual fall/winter clothes, I would definitely have enough nickels to buy myself a poncho. If you, too, identify with this highly specific urge, I have excellent news: said ponchos (!) were all over the Fall/Winter 2019 runways, and the micro-trend seems primed to continue into the next season based on Erdem’s recent show in London. Furthermore, I spotted a few iterations of the poncho’s fraternal twin, the pashmina (!!!), during New York Fashion Week this September, which means general torso drapery is very much on the fashion industry’s collective mind at the moment. To be perfectly honest, which I always try to be when discussing matters such as torso drapery, I wasn’t quite sure what to make of this phenomenon when I first caught a whiff of it last winter. I was intrigued with the prospect of having an alternative form of light outerwear beyond jackets and sweaters, but it was unfamiliar enough territory that I couldn’t envision exploring it myself. Eager for tutelage, I reached out to my friend Mecca, who in addition to being a professional stylist by trade is also someone whose outfits I frequently admire. She never shies away from a challenge, whether it’s wearing a bra as a top or black-tie swimwear. If anyone could make a case for incorporating ponchos and pashminas into wardrobes worldwide, I knew it was her. Scroll down for a very compelling demonstration. -Harling

Lesson No.1: Add a belt for definition…

One of the most common fears associated with wearing a poncho or poncho-adjacent garments is their propensity for shapelessness. While wearing what is essentially a blanket with a hole for a head is extremely cozy, it can produce a tricky human-to-fabric ratio as a result. Mecca’s solve for waist definition? A belt! Plus, wearing a dress underneath that was the same length as the poncho over it, thus creating a streamlined effect.

Or fully embrace the distinctive proportions…

When wearing a more traditional, oversize, asymmetrical poncho, Mecca recommends leaning in fully and embracing the silhouette by playing it up with more form-fitting pieces underneath: “This poncho/I mean blanket/I mean sleeping bag was hands down a fave,” she explained over email. “I let go of the need for definition, and added a killer boot to give me the perfect ‘I’m that bitch’ touch! It was fun.”

Pashminas, spotted recently at 3.1 Phillip Lim and Mansur Gavriel during New York Fashion Week, are notably beloved by grandmothers (mine included), so I was very much on board when Mecca leaned into that identity with her styling approach, pairing one with the refined combination of a silk blouse and a brooch that I someday aspire to wear on a regular basis when I’m in my 80s–but ideally sooner. For footwear, she decided to go with sneakers, reminding me how much I enjoy the contrast of sophisticated on top vs. casual on the bottom (doubly reinforced by her slouchy leather trousers).

I also love how she wore the pashmina like a Miss Congeniality sash–further proof of their versatility (and Mecca’s genius) since this particular technique isn’t even mentioned in the eight suggestions that come up when I type in “how to wear a pashmina.” But that hyperlink is worth checking out regardless, just in case you’re thirsting for more draping ideas.

Trust Me, Try It: A Surprise Wrap Skirt Layer

“I had this idea to utilize a wrap skirt as the framework of the look,” Mecca explained. “I have the front side of the poncho tucked in and the back free as a bird to sail through these NYC streets.” The result was probably my favorite look of the bunch because it was by far the most creative and something I would never think of myself. A wrap skirt! Tied around a poncho! Truly a revelation.

Feeling non-committal? Get creative with an oversized scarf…

If you want to dabble in the poncho trend without actually going out and buying a poncho, Mecca has a hack for that, too: wrap a big, oversized scarf around your shoulders and belt it at the middle with enough fabric bunched at the front that it conceals the opening. Perfect for my fellow aspirational pigs-in-a-blanket who fantasize about the elusive possibility of swaddling themselves 24/7 whilst still retaining a sense of personal style.

What are your thoughts on the poncho/pashmina trend? Tell me! I must know. 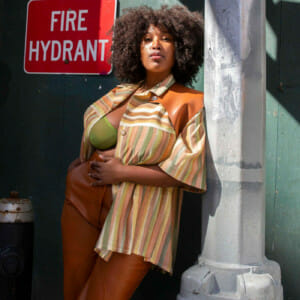 Mecca James-Williams is a New York-based creative and stylist.