Niles Mattier teaches fifth and sixth grade at his alma mater, the Boston Collegiate Charter School, and in December 2018, he debuted an Instagram feed meant to be a gathering space for other queer, Black educators. We asked him to lead us through his current lesson plan: American History, from Early American Cultures to the present day. If you were in fifth grade more than 10 years ago, Mattier’s perspective might represent a worthy, and foundational, paradigm shift.

Every summer, I sit down and create what’s called a “scope and sequence.” I’ll look back at the curriculum to figure out what went well, what improvements I can make, and then I’ll plan out the units for the year — everything I want to teach the kids.

With this age group, they’re still very open. When I worked with high schoolers, some of them were, like, “I’m just not a math person.” Or, “I just don’t like science.” At this age, they haven’t formed those opinions yet. They’re still open to trying everything. That’s a really unique place.

I have six units currently:

One of the themes I try to weave through my classes is perspective: Who wrote this source? Whose voice is being heard? Whose perspective are we not hearing? Are there any biases here? If we’re reading a diary entry from Christopher Columbus, the way he sees people is going to be so different from the way he’s seen by Native American people. Unfortunately, a lot of those primary documents are from the European perspective, because much of the art and language of those Native American peoples was destroyed.

III. Government and The New Republic

We look at the binding documents of our country — The Declaration of Independence, The Constitution — and we look at where it’s written that all men are created equal. When we celebrate the Fourth of July, the American colonists are celebrating freedom from British rule. But whose Independence Day is this not? Of course, these documents change and evolve, but we look at the loopholes that persist anyway — like the 13th Amendment, which forbids slavery, “except as a punishment for crime whereof the party shall have been duly convicted.” I want them to consider these loopholes — and then consider what they mean: What’s the relationship between that loophole and current-day mass incarceration of African-American people?

IV. The Civil War and Reconstruction

Reconstruction is a pretty brief period of time — from about 1865 to 1877 — and some curriculums gloss over it. But it’s an important point in our history, when African-American people really are free, and they set up organizations and institutions that allow them to support themselves financially and educate their children. This is when we see the first African-American people elected to government positions. Five years earlier, someone could have been enslaved — and now they’re holding office.

V. The World Wars and The Civil Rights Movement

We talk about the Japanese internment camps — how after the bombing of Pearl Harbor, and the U.S. goes to war with Japan, the government created this hysteria that Japanese Americans might be on the side of Japan and forced them into internment camps. They’re not killed there, or abused as people were in concentration camps, but people [in the U.S.] were taken from their homes, children weren’t educated, people were forced to give up their businesses. It’s a hurtful, harmful part of American history. Ignoring it is an injustice.

We’ll also talk about the Civil Rights movement. I try to bring in voices that aren’t often heard — like Bayard Rustin, who worked alongside Martin Luther King but didn’t come to the forefront of the movement because he was gay, and [civil rights leaders] thought he might distract from their message. Claudette Colvin was 15 and pregnant during the Montgomery bus boycotts. She decided she wasn’t going to give up her seat — nine months before Rosa Parks. But she didn’t become the face of the movement because she was a pregnant teenager.

The “resurgence” — and I put “resurgence” in quotes — of police brutality against African Americans is happening simultaneously with teaching it. One aspect of the classroom I really love is what’s called a fishbowl discussion. We’ll have a question — “Is the U.S. a fair and just country?” — and the students will have time to prepare for their positions. We’ll sit in a circle, they’ll bring quotes from texts they’ve read, charts and graphs and data. — and I think a lot of kids might have had different answers to that question, had this not been happening at the same time. Sometimes we’ll learn about the Civil Rights movement and they’ll think, “This stuff happened so long ago” — but no, it’s like, “This is happening now, and there’s a protest in downtown Boston, 15 minutes away from school.” They’re seeing all these things happen right in front of their eyes — and they’re able to use all these tools we’ve talked about, so they can analyze the media, they can talk about who wrote this story, and what kind of bias they might have. They can talk about those things when they watch the news with their parents.

I definitely think the news coverage has activated some fire in these students. They’ll ask me: “I’m 10 — is there anything I can do? My mom won’t let me go to the protests.” And I’ll say, “It’s okay if you can’t go to the protests — this is our district attorney, and if you want, I can help you send an email to them, saying how they can support schools better.” Even if you’re 10, there are things you can be doing. You can talk to your friends and your family. You can show them the evidence you’ve collected. And I hope they’ll bring those skills along with them, for the rest of their lives; I hope they’ll ask questions, and stay inquisitive. I’m a history teacher. That’s the job. 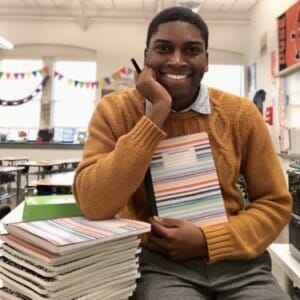 Niles Mattier is an upper elementary History teacher in Boston, MA. He has a BA in History & Education Studies from Syracuse University and is currently pursuing a Master of Education at Boston University.