Last week, Sarah Panlibuton Barnes, curator and host of our! new! book club! announced that her first pick would be The Death of Vivek Oji by Akwaeke Emezi. The story follows the life of a young boy in Nigeria, after he one day turns up at his family’s front doorstep. Today, we’re publishing a short excerpt to give you a sampling of the incredibly moving, poetic writing within and to further encourage you to place your order—today is The Death of Vivek Oji’s publish date and the first copies are shipping out now!

On the day Vivek was born, Chika had held the baby in his arms and stared at that scar. He’d seen it before—Kavita always commented on its shape whenever she rubbed Ahunna’s feet. Kavita had been without a mother for so long, her love for Ahunna was tactile and rich with childlike affection, a hundred thousand touches. They would sit together, read together, walk in the farm together, and Ahunna would give thanks that she’d given birth to two sons and been gifted two daughters. When Ekene and Mary had their child Osita, Ahunna had wept over his little face, singing to him in soft Igbo. She couldn’t wait for Chika and Kavita’s baby to arrive.

Now it was a year later, and Chika felt something building in him slowly as he held his newborn son—like folds of pouring cement hardening into a sick fear—but he ignored it. These things were just stories; they couldn’t be real. It wasn’t until the next day that a messenger boy from the village came to Ngwa to tell Chika that Ahunna had died the day before, her heart seizing at the threshold of her house, her body slumping into her compound, the earth receiving her slack face.

He should have known, Chika told himself as Kavita screamed in grief, Vivek clutched to her chest. He did know. How else could that scar have entered the world on flesh if it had not left in the first place? A thing cannot be in two places at once. But still, he denied this for many years, for as long as he could. Superstition, he said. It was a coincidence, the marks on their feet—and besides, Vivek was a boy and not a girl, so how can? Still. His mother was dead and their family was bereft, and in the middle of all this was a new baby.

This is how Vivek was born, after death and into grief. It marked him, you see, it cut him down like a tree. They brought him into a home filled with incapacitating sorrow; his whole life was a mourning. Kavita never had another child. “He is enough,” she would say. “This was enough.”

Picture: a house thrown into wailing the day he left it, restored to the way it was when he entered.

Picture: his father shattered, his mother gone mad. A dead foot with a deflated starfish spilled over its curve, the beginning and end of everything.

Want to make sure you never miss a book club update? Sign up for our dedicated newsletter here. 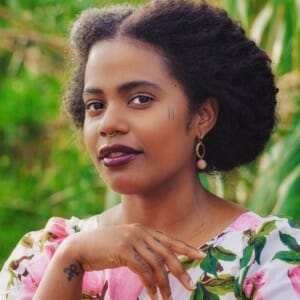 Akwaeke Emezi is the author of the novel The Death of Vivek Oji, published by Riverhead Books. Their debut novel Freshwater was named a New York Times Notable Book and shortlisted for the PEN/Hemingway Award, the NYPL Young Lions Fiction Award, the Lambda Literary Award, the Center for Fiction's First Novel Prize, and was longlisted for a number of other awards. Emezi's second book, Pet, was a finalist for the National Book Award for Young People's Literature.