In partnership with The OUTNET.

Much like capsule wardrobes and the perfect pair of white cotton underwear, fashion “uniforms” are venerated as the stuff of sartorial holy grails. They are renowned as the ultimate signal that you know your style and therefore yourself through and through–to the extent that you are able to recognize a specific combination of clothing as distinctively, unwaveringly you. They’re also lauded as the secret to getting dressed quickly in the morning, to saving time before you head out the door so you can spend it elsewhere once you’re out in the world. In a sense, having a fashion uniform is akin to a state of enlightenment, a higher plane of existence.

Of course, in practice, the concept of a uniform is much more nuanced. It can be defined in multiple ways, from a loose template to a highly particular set of criteria. It can encapsulate someone’s entire style philosophy or just a small, reliable subsection. It can be a fixed point or an amorphous, evolving idea. To explore the fascination around uniform dressing and what it means to different people, three members of Team Man Repeller (myself included) styled themselves in personal-to-us uniforms with clothes from The OUTNET and unpacked why we chose what we did. Scroll down to give it a read, and tell us about your relationship with fashion uniforms in the comments below.

I wore a uniform every day from kindergarten through eighth grade–a uniform that involved an itchy wool skirt and little under-shorts with a perpetually too-tight elastic waistband. I think that probably shaped my relationship with fashion uniforms from an early age, because I associated them with restriction and conforming, which is why when I started at a different school in ninth grade and suddenly didn’t have one anymore, I was burdened by the opposite problem. It was like walking into a candy store after being deprived of sugar for a decade and being told, “Go ahead! Eat whatever you want!” Needless to say, the results (i.e. outfits) were a bit chaotic.

It wasn’t until I graduated from college that I began to reconsider my relationship with uniform dressing. I knew I was never going to be the type of person who would make a singular commitment to a certain ensemble for the rest of my life, but I still craved a happy medium that would give me structure while still allowing for evolution. I wanted a go-to template I could rely on whenever I was stumped about what to wear, or simply in the mood to put on something tried-and-true that made me feel like my best self.

I’m writing about this as if my process to finding a “uniform” was thoroughly intentional, but I suppose it only seems that way in hindsight–as is the case with many byproducts of growing up. The truth is, at the time it felt more inevitable than intentional, like a gravitational force was pulling me towards certain articles of clothing in certain combinations. The one that stuck is what I’m wearing via The OUTNET in these photos: a feminine (often floral) dress, a plain blazer (though this could be swapped out for a cardigan depending on my mood), and loafers.

It’s ideal because it’s comfortable without devolving into sweatpants territory, and exemplifies my favorite aesthetic sandwich: a statement piece bookended by two neutral classics. It’s not boring by any means, but is simple enough that it leaves room for decorative flair by way of accessories (in this case, I opted for a burgundy purse to pick up on the dress’s print). In other words, it hits all my personal benchmarks for the ultimate outfit uniform, one that announces I have an interest in fashion without sacrificing my ability to walk 25 minutes to work with ease, give or take a caffeinated beverage detour. 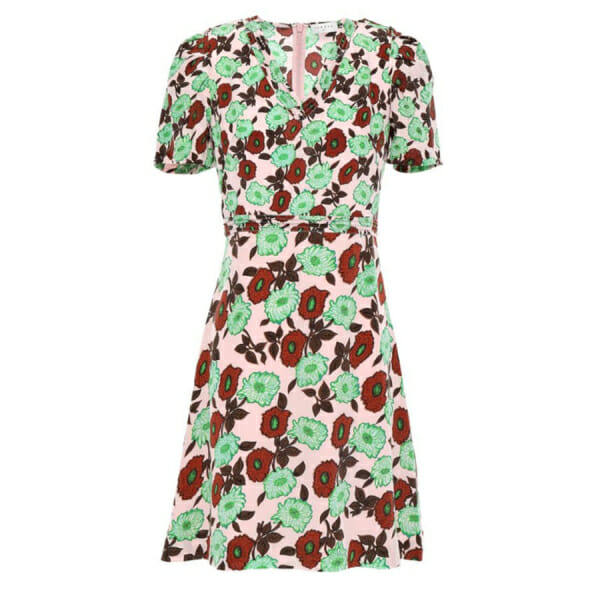 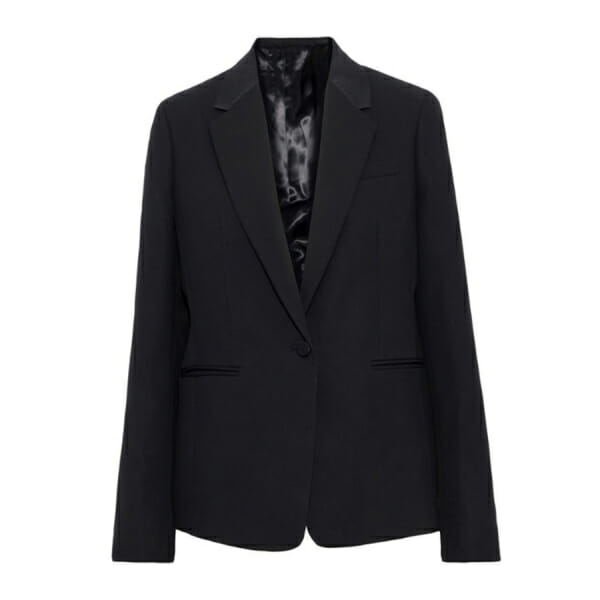 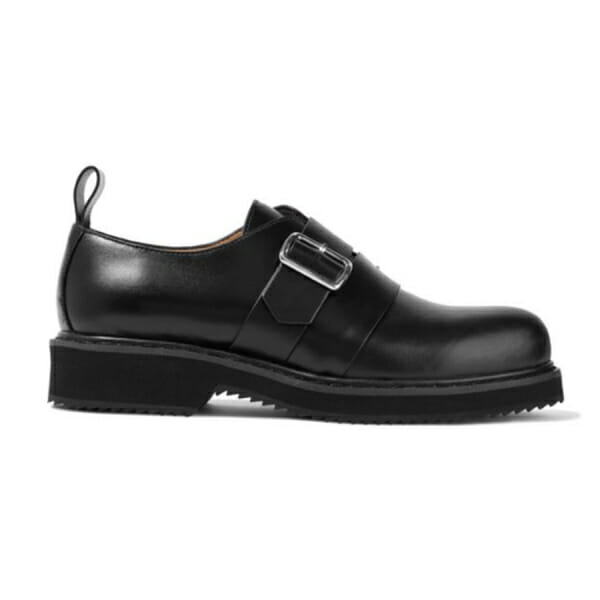 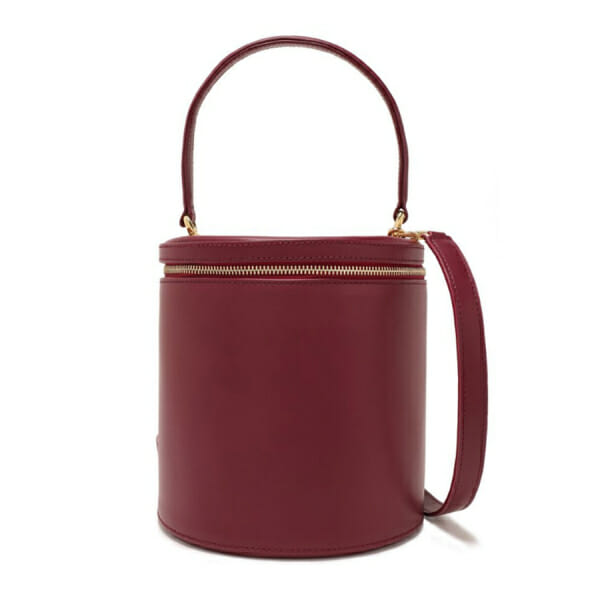 I used to think of uniforms as innately monotonous because they are pre-conceived, but my mindset shifted when I realized that a “uniform” doesn’t necessarily mean the exact same clothes combined in the exact same way every time. My version of a uniform is less about consistency when it comes to the specific components and more about consistency when it comes to the function these components are performing. The function I personally look for in a uniform is the ability to move freely while simultaneously showing my personality to the world.

Oftentimes, that means big, blousy layers upon big, blousy layers. Summer, winter, or otherwise, layers are my armor–and the more voluminous the better (if you see me in two pieces of clothing, I’m probably way behind on doing laundry). Not only does a pile of loose layers allow me to move freely, but it is also perfect fodder for taking pieces that hundreds of people might own and making them squarely and uniquely me.

I was first drawn to the above Simon Rocha dress (which I’m wearing backwards) because it looks like something a celebrity would jump out of at a fancy birthday party. When I saw it, I immediately thought, ohhh! I can layer so much stuff under and around that glorious volcanic eruption of tiers and ruffles!! Case in point: I added a second dress underneath, which was sleek enough to avoid any weird bunching but still a statement in its own right with its dramatic long sleeves. For my last party trick, I layered on a flannel shirt from Faith Connection–the cherry on top! The result was a uniform tailor-made for me and only me, and that is my greatest joy, truly. 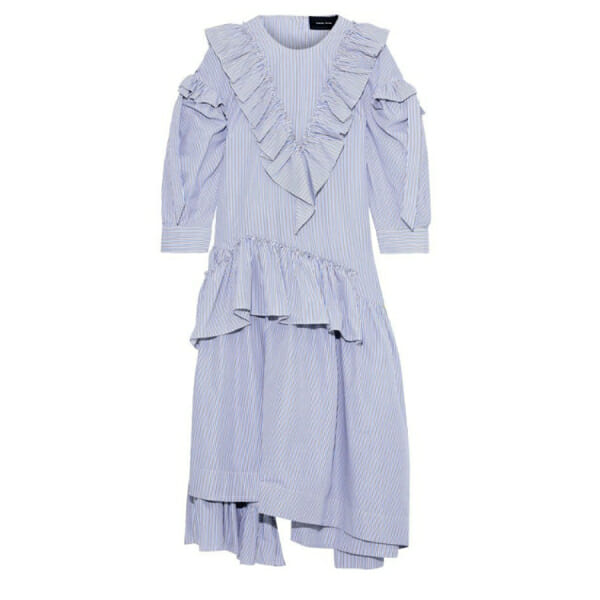 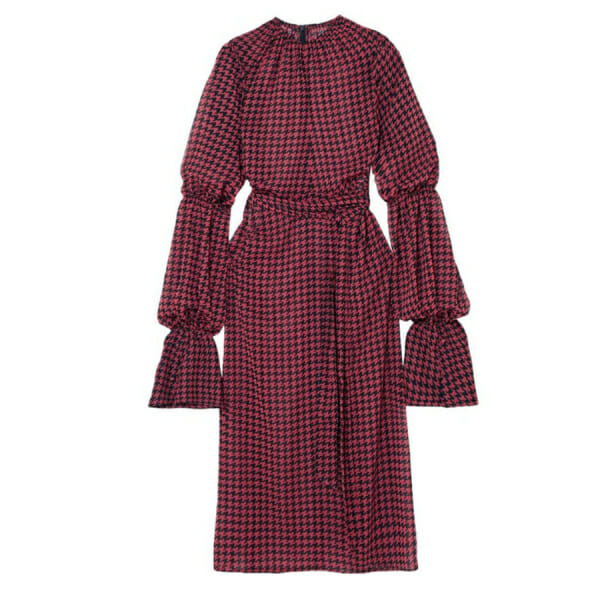 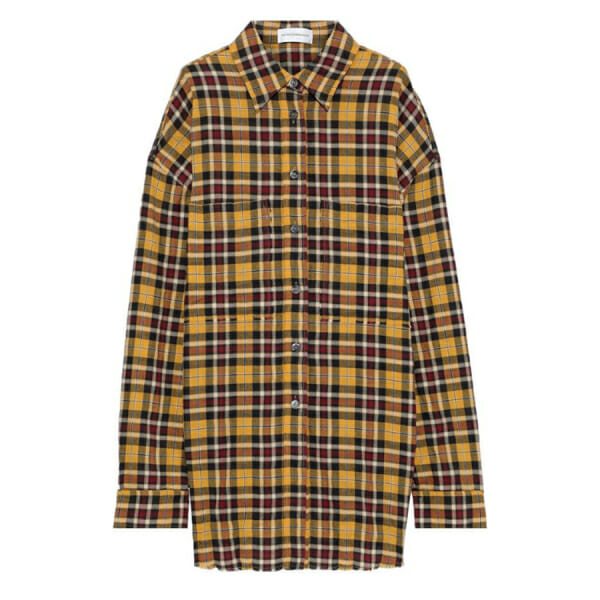 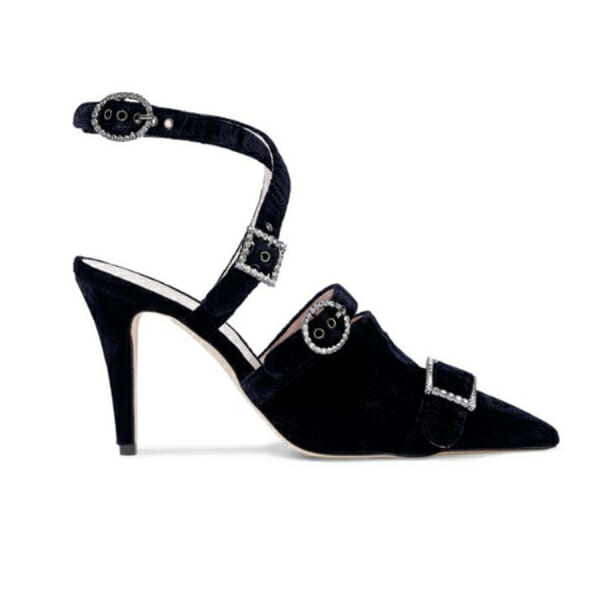 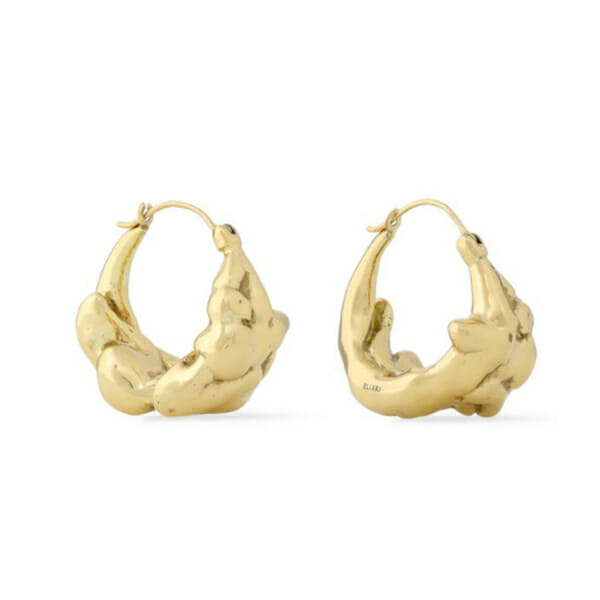 I find comfort in uniforms. I wore a uniform throughout my entire schooling years (they’re mandatory in Australia) and during my university years, I worked at a retail chain store where a new uniform was assigned at the beginning of each month. In hindsight, I’m positive this kind of prescriptive dressing from age four to 19 is probably why I am so drawn to wearing a uniform as an adult. During my morning routine, choosing clothes for the day is assigned to the final five minutes I have before rushing out the door—this time allowance includes 2–3 minutes for necessary steaming, so I really do limit myself. The only reason this particular routine works for me is because I almost exclusively buy clothes that fit within certain constraints that mean they’ll match most other things in my (pretty minimal) wardrobe: black and white T-shirts, high-waisted jeans and pants, and sweaters. I know I can leave myself such little time to get dressed in the morning because I’m accustomed to uniforms, and I know everything I own works together.

This outfit is painfully me, especially the pants. I exclusively wear high-waisted pants, shorts, jeans, and skirts—about a year and a half ago I also traded out all my old underwear for new high-waisted underwear. The thought of any piece of clothing sitting lower than an inch below my belly button is my own personal nightmare. This sweater is also Typical Me in that it’s equal parts “would go with anything” and “more fun than your average sweater.” I am in no way a maximalist so on the rare occasion I do wear a print or bold color, I have a deep and desperate need to pair with something perfectly neutral—in the case of this outfit, I’m achieving my dream combination of top and bottom that both qualify as “neutral but also interesting in the way of texture or silhouette.” While the shoes and bag aren’t exactly neutral they also fall within my dream color palette that’s made up exclusively of burnt oranges, olive greens, creams, and blacks. If I was wearing either with anything other than a black or beige outfit I wouldn’t feel exactly like myself but in this scenario everything’s just how I like it.

What I love most about my uniform is how comfortable I feel in it. While the high-waisted pant and *insert top or sweater* uniform has only truly solidified in the past two years, I’ve always felt happiest in outfits that feel both chic and wearable—as in, wear-from-9am-to-9pm-if-need-be wearable. This particular outfit, in all its fall beauty, is a kind of new development. Before moving to New York two years ago my autumn and winter outfits were simply my summer outfits with the addition of a jacket, and maybe tights and a coat if it was exceptionally cold out. (Miss you, Sydney!) Since being in NYC I’ve realized that, yes, I actually do need to dress for the season, which means altering my uniform as the year ebbs and flows through periods of weather I either love or hate.

The uniform feels quintessentially me because it’s minimal, while also being flattering and relatively grown up. It feels like me because I feel like me in it. I can’t think of anywhere, besides maybe a funeral or a wedding, that I wouldn’t feel comfortable wearing this outfit. 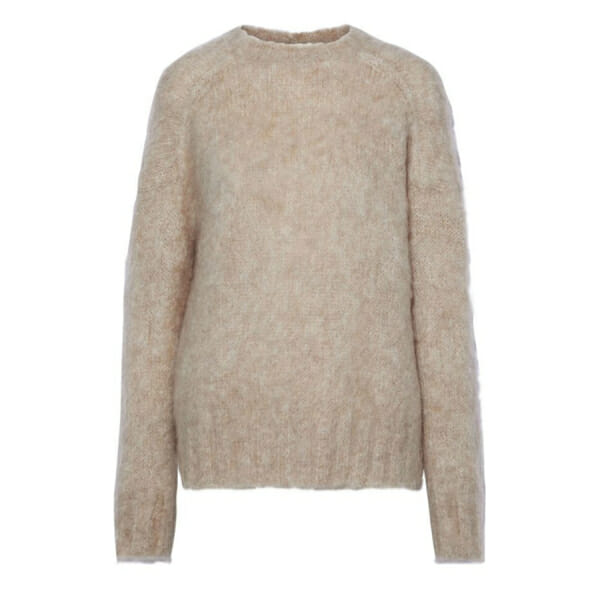 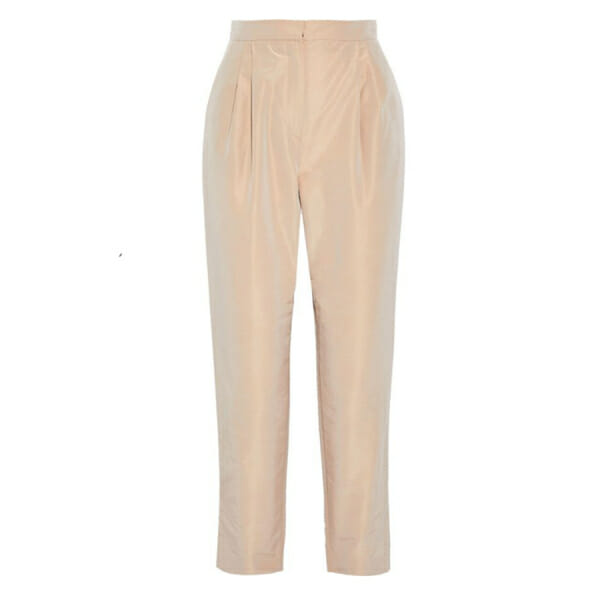 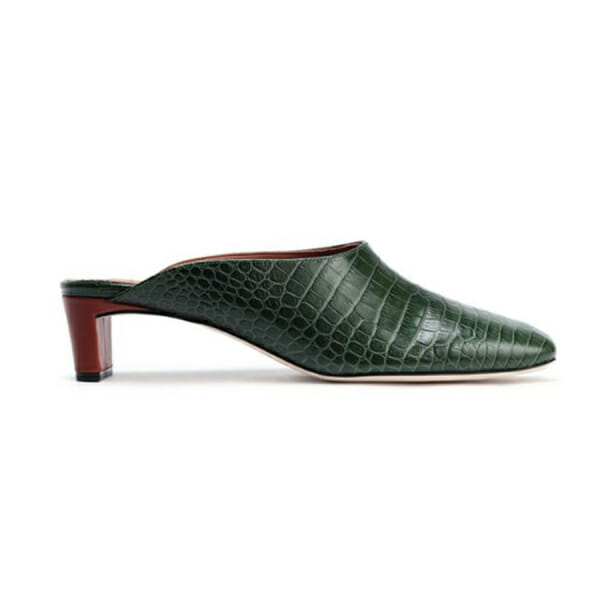 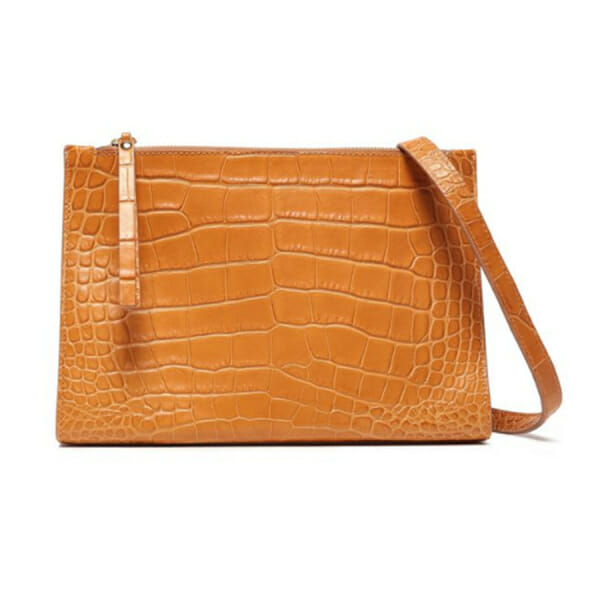 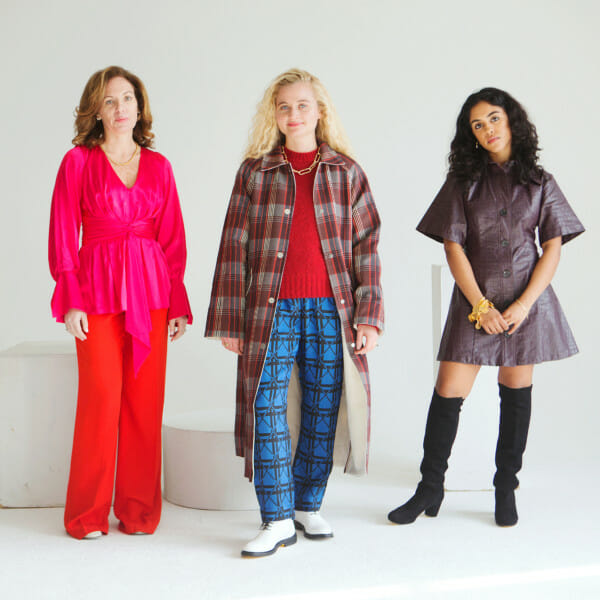 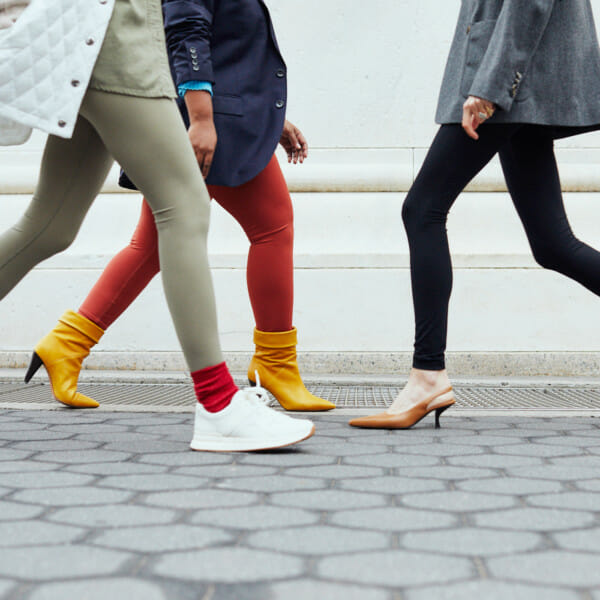