You know Amy Smilovic as the woman who has perfected the art of daily headless mirror selfies that are equal parts super-sleek and super-funny. What you may not know is that Amy became the founder of a clothing brand after spending just thirty-eight dollars on four clothing samples on her third day living in Hong Kong.

Since her foray into fashion entrepreneurship in 1997, Amy has grown Tibi into a contemporary women’s brand known for bringing elegance to asymmetrical silhouettes and creating designs with the recognition that clothes are meant to be lived in. Man Repeller HQ was not immune to the powers of Tibi’s plaid kitten heel boots which ascended to the top of our shopping lists when we first saw them grace the feet of Amelia Diamond.

As fans of the brand, we were eager to hear how Amy built Tibi into the line it is today. So, we invited her to Man Repeller HQ for our second installment of Good Evening where our very own Leandra Medine Cohen picked Amy’s brain like a rogue surgeon.
Below are five golden nuggets we absorbed from Amy’s journey to becoming the founder and Creative Director of Tibi, delivered in signature deadpan style:

1. “Fake it til you make it works… as long as you understand that you’re faking it.”

“If you start to believe your own hype, then you have serious problems on your hands,” Amy explained. “You don’t have a business until you have a product.” As Amy geared up to launch Tibi, she made incremental calculations of how much money she could lose and still be okay. Instead of creating an ambitious long-term plan, Amy kept herself humble by focusing on concrete short-term gains.

2. “When you move to another country you have permission to try something you wouldn’t normally do. Especially if the people speak another language—they could be saying ‘No’ and you’re like… I don’t even know what they’re saying.”

When Amy moved to Hong Kong, she had just left her job at American Express. Finding herself in an unfamiliar city with no obligations, she decided to bring four of her fashion sketches to life. At home, she had the ability to check in with friends and question things, which didn’t slow her down abroad. A new environment might just have the power to free you of the inhibitions holding you back—or you can try plugging your ears and singing lalalalalala.

3. Make the most of your bathtub.

Amy’s first order consisted of 4,000 pieces. She stored the boxes of pants in the bathtub of her Hong Kong home, and spread the rest throughout her kitchen cabinets. By dreaming big but starting small, Amy was able to make informed, calculated decisions—starting with a sale in her own home with the hope that she’d sell enough units to be able to take a shower afterward.

4. “When I decide something isn’t good anymore, I need to destroy it all the way.”

After Leandra went through a breakup in 2006, she knew her heart was truly broken because she didn’t feel like buying anything (lol). That is, until she came across a “ditsy floral frock” from Tibi. But when Leandra met Amy years later, she was shocked to discover that the woman behind the frock was “sleek, modern, clean lines, very limited color, doesn’t want to talk to you if you even smell like a peony.”

Amy explained that in Tibi’s early years retailers had latched onto the floral skirt trend and subsequently urged Amy to put out as many floral prints out as possible. Striving for a sustainable business, Amy took the advice but found that it had pigeonholed the brand into an aesthetic unrepresentative of Amy’s true taste. “The only thing I can bank on is creating things that I love and want to wear,” Amy said. So she bagged the florals and began creating the line she’d always wanted. “That’s when everything changed.”

5. “When people put down clothing as being superficial, take a look at history.”

When fashion is labeled as trivial, Amy doesn’t buy it. Thinking about historical, ornate beaded necklaces, she says, “From day one, someone put something on and felt something.”
Leandra, decked in striped pants, a polo, and a fringed camel blazer was quick to agree: “Even if it is a survival mechanism, even if we are just cogs in a wheel, all of us are just trying to survive, and if we have figured out the way to survive and feel good about it by putting something on, go for it. When people apologize for reading gossip magazines I’m like, ‘Look, if that’s what’s bringing you joy, just fucking read the magazine.’”

Good Evenings are monthly events that bring the Man Repeller community together over burning candles and Ramona spritzers to get a behind-the-curtain peek at industries that inspire us from people we admire.

Keep your eye on Man Repeller’s Insta Stories to find out about ticket drops for future Good Evenings! 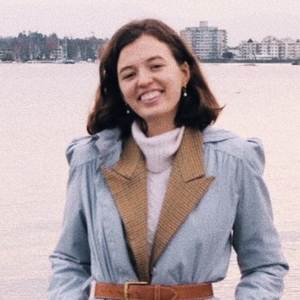 Starling Irving is a New York-based writer and photographer with an affinity for vintage suitcases, toile de jouy, and anything with a mint leaf garnish.