They had names like Dream White, Classic White, and White Beauty. Growing up in the Philippines, creams and salves that promise to “level up your beauty” were everywhere—including in my personal beauty product collection. One advertisement showed a woman in a cutout bodycon dress sashaying past members of the opposite sex left spellbound by her “rosy white” glow. At family gatherings, “You’re so white!” and “mestiza,” a term referring to Filipinos with foreign ancestry or Eurocentric features, are top-tier compliments. “The Philippines’ most beautiful faces share one secret,” a commercial begins. The secret, as you may have already guessed, is that they all use a whitening cream.

Calcified by consistent messaging, this “lighter is better” beauty standard was in full gear. Unfortunately, it didn’t just place fairer Filipinos on a pedestal, it maligned “morenas,” or those with darker skin tones, by perpetuating the notion that melanin is undesirable. As a result, many Filipinos embraced skin lightening, religiously buying products with megadoses of vitamin C and glutathione, pushed for their lightening properties, and enduring routine intravenous glutathione injections.

As a lighter-skinned Filipino, I still felt the pressure to maintain a fair complexion and worked diligently to keep it. I once promoted an “extra whitening” lotion in a video advertisement as one of the brand’s “Fun, Fearless, and Fair” women. I cringe when I recall my testimony—that my confidence was a result of my skin tone. But for years, I believed that—until my skin actually started turning white.

I developed vitiligo at 24, when two barely-noticeable white dots appeared on the beds of my nails. I tried to rub them off and, when nothing happened, chalked it to manicure trauma. Then it spread.

In the six years since my diagnosis, light dapples spread across my skin, some as small as M&Ms, others as big as peanut butter cups, and sections of my hair started turning gray. At first, insecurity manifested itself in subtle hesitations—a handshake ended too abruptly, hypervigilance about arm placement, photos obsessively edited to color in my spots. Each new blemish eroded my confidence, and I oscillated between acceptance and despair.

Vitiligo, now a widely-known autoimmune disease thanks in large part to America’s Next Top Model alum Winnie Harlow, is the result of a loss of pigment in the body and affects around 1% of the world’s population. My immune system can’t tell good cells from bad and mistakenly red-tags melanocytes, the body’s pigment-producing cells. What triggers this pigment massacre remains unclear, though researchers speculate it’s a permutation of genetics, environment, and stress.

My condition apparently also manifests in the body’s folds: elbows, armpits, and intimate areas, infiltrating the one place I didn’t think it would: the bedroom. Making already vulnerable situations even more terrifying, I dreaded how dates would react to my atlas of spots. I will always fondly remember an ex-boyfriend who memorized the patches on my hands, tenderly kissing them whenever he got the chance. Unfortunately, not everyone was as kind. One partner, during intimate moments, blatantly refused to look at them.

Though doctors reminded me there were no guarantees, as vitiligo has no known cures, I adhered to the strict regimen topical therapy entailed, lathering my spots in steroid cream and baking them under the morning sun to trigger melanin production. Then, discouraged by the lack of results, I quit.

When I gave up on treatments, my mother became frustrated, to the point that my vitiligo cannibalized our interactions. One day, she surprised me with a gift, special-ordered theater foundation, for complete coverage. “Only for special occasions,” she whispered when she sensed my dismay.

She sought all kinds of cures: medical, spiritual, even supernatural. Cycling through ideas about what might be wrong, she once believed I was cursed and found a “healer” to pray over me. As the healer lit candles, murmured incantations I couldn’t make out, and anointed my hands with his signature oil blend, I thought, if I wasn’t hexed before, I would definitely be after this. Though her efforts were out of love, at that point I had stopped demanding perfection from my skin, and I had hoped she would too.

If I expected other people to accept my spotted existence, it was imperative that I, too, did the same. My journey with vitiligo has been one of bodily acceptance—a beauty rewiring feat on its own.

I moved to New York four years after developing my skin condition. In a city where the color spectrum is much wider, the whiteness of my surroundings, even just at home with my white roommate, made my spots—and the melanin around them—feel all the more pronounced. I had to dismantle my own warped beauty valuation system. If I clung to the beauty standard I was taught growing up, how did I see others now that gradients were more nuanced? Who did I now find beautiful? Did I automatically deem fair as better? And, in this expanded color palette, how did I see myself? My new experiences, although they’re not as traumatizing as the experiences of darker-skinned Filipinos back home, opened my eyes to their plight.

Recent reckonings on racial injustices following the death of George Floyd prompted Filipinos in the diaspora to coalesce in support of Black lives. “Filipinx for Black Lives Matter” posts circulated online, calling upon the community to examine our own colorism. These conversations, led by a Filipino collective in New York and a few outspoken individuals, compelled me to excavate my own prejudices growing up Filipino—how centuries of colonization (more than 300 years by Spain, almost 50 by the US) led to a collective premium on whiteness and a closeted desire to be white-adjacent.

When colorism is so embedded in your cultural DNA, the many seemingly innocuous associations with skin tone (not just about beauty, but class and power, too) are dangerous. While dark skin is historically associated with laborers toiling under the sun, fair skin is seen as a status symbol often referred to as “kutis mayaman” or the complexion of the wealthy. Lightness also represents upward mobility and disproportionately affects job eligibility. This job posting for a facialist lists “fair complexion” as one of the requirements.

I’ve realized that just because the packaging is palatable—say a harmless bottle of lotion—doesn’t mean the messaging isn’t oppressive. Complexion shouldn’t be a determinant of access and opportunity, but because it is, many Filipinos of varying skin tones strive for this unattainable ideal. Though some movements in the Philippines, including a dedicated T-shirt label and a photography project, are creating ripples in reclaiming the beauty narrative surrounding darker skin, there’s a long way to go. Peeling back the layers of a colored consciousness takes internal work. As my therapist always says, “question the programming you were downloaded with.”

So I am reprogramming my ideations of skin tone and flawlessness. As with any healing process, my skin and I are on a journey. Each year brings new spots. Sometimes they still render me socially crippled. Some days I love them, fetishize them even. Mostly I forget they exist. Some people have birthmarks. Tattoos. I have my own dynamic constellation. Now, when people ask about my vitiligo, I go beyond an explainer. “Ironic, isn’t it?” I ask as I share anecdotes of using lightening products to uphold prejudiced beauty ideals. Now, I can honestly say, it took parts of me literally turning white to appreciate the melanin around them—and the heritage and beauty it represents. 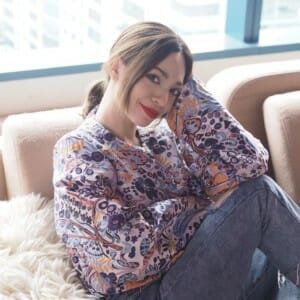 Alyssa is a Brooklyn-based culture writer who holds an MA in Journalism degree from Columbia University. Her hobbies include dancing solo in her living room and pining for her seven dogs in the Philippines, where she grew up.